Mabel Pines is the twin sister of Dipper Pines. She is voiced by Kozue Harashima and Kristen Schaal in Japanese and English, respectively. She also appears in Crossover Academy, a show loosely based on Multiverse X.

Mabel is the sister of Dipper, and the stepsister of Bolin and Cyro and a good friend of them. She is happy, kind and cute like the other residents of Multiverse.

Mabel Pines is an optimistic, fun, and energetic girl full of spirit. She is an optimist who skips through life with a braces-filled smile and an assortment of extremely colorful knit sweaters. It is her outgoing personality and fearless curiosity that comes in handy when Dipper needs help solving a mystery, even if she isn't always aware of her silliness. Despite her cuteness, beauty, cheerful attitude and her ability to be able to look on the bright side, she can occasionally get her feelings hurt, especially by her rival Pacifica Northwest. Mabel avoids lying and is a terrible liar herself, often blurting out whatever it is about which she is trying to lie. She is a preteen dreamer with a world filled with preteen novels (mostly about vampires), and her fixation on finding her one true love occasionally lands her in sticky situations which ultimately require her brother's help. Still, despite all the weirdness in Gravity Falls, Mabel is always a "glass-half-full" kind of girl. She is rarely angry or upset, and generally keeps a positive outlook. She is somewhat naive at times. Mabel is aware of her charm, and cherishes her cuteness and beauty. However, she has a selfish side, particularly when it comes to boys she's infatuated with, even breaking promises made with friends in pursuit of her crush as shown in "Sock Opera." She has also shown to be self-righteous in her decisions which can be far from justified or accidentally backfire in some way such as shoving her brother in a closet with Wendy so that he can end his anxiety and admit his crush on Wendy which unintentionally endangers them when they encountered a dangerous creature in Into the Bunker and causing Wendy's and Dipper's friend group to temporarily break up after she had made Robbie and Tambry to date each other in "The Love God." However, like her brother, she has the best of intentions and she will always try to choose the right options for the happiness of herself and others.

Mabel is a short 13-year old girl, exactly one millimeter taller than her twin brother. She has round blushing cheeks, long brown hair that reaches her hips, her eyes are the same brown as Dipper's, and she has silver-colored braces. Mabel's apparel varies for each episode, more so than any other character's, with at least one new outfit usually consisting of a sweater, undershirt, skirt, headband, black shoes, white tights, and occasionally earrings, though she does deviate from this look occasionally.

Her signature outfit is a short-sleeved pink undershirt underneath a red sweater with a rainbow shooting star falling toward the left, a matching red headband, purple skirt, and black slipper shoes with white tights.

Her role within the Weirdmageddon Trilogy remains the same, except for this game, she has given more development and her role is expanded. For instance, towards to the near end of the Game, she joins forces with everyone (led by Captain Jake, of all people) who is against Bill Cipher in a Final Showdown that would occur to prevent an Omniversal Weirdmageddon Crisis. 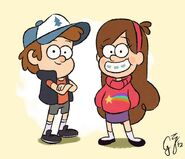 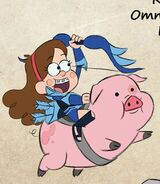 Retrieved from "https://ideas.fandom.com/wiki/Mabel_Pines?oldid=2384309"
Community content is available under CC-BY-SA unless otherwise noted.