Let's Go Luna 2: The Second Part (aka. Let's Go Luna 2: Detective Baby Rosalina) is an upcoming 2022 animated comedy film was made by Columbia Pictures, Thrashcartoon Productions, and Thrashcartoon Animation on July 15, 2022, in the United States and Canada. It received mixed reviews from critics, as with its predecessors, and has grossed $98 million worldwide against a budget of $80 million. And it's a sequel to the 2020 film, Let's Go Luna. A Toopy and Binoo short film, Toopy Knows Everything will be in theaters with Let's Go Luna. This film is dedicated to Kelly Asbury, who died on June 26, 2020, by cancer. Production began on August 2020.

In July 2020, Columbia Pictures and Thrashcartoon Productions we're planning to make a sequel of the first film.

Filming began during the COVID-19 pandemic.

Let's Go Luna 2: The Second Part is scheduled to be released theatrically on July 15, 2022.

Surfing is an important thing to do poster

Babysitting a baby elephant is an important thing to do poster 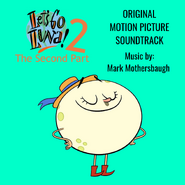