Let's Go Luna is a 2020 animated comedy film was made by Columbia Pictures, Thrashcartoon

Luna the moon guides three friends -- a wombat, a butterfly and a frog -- as they visit new places around the world with their parents' travelling performance troupe.

As of November 8, 2020, Let's Go Luna has grossed $45.4 million in the United States and Canada, and $53 million in other territories, for a total worldwide gross of $98.4 million, against a production budget of $80 million.

In the United States and Canada, and was projected to gross $38–45 million from 4,267 theaters in its opening weekend.

On website Rotten Tomatoes, the film holds an approval rating of 100% based on 72 reviews, with an average rating of 5.5/10.

A sequel, Let's Go Luna 2: The Second Part will be released in theaters on July 15, 2022. It will be produced by Thrashcartoon Productions and Columbia Pictures and distributed by Sony Pictures Releasing. 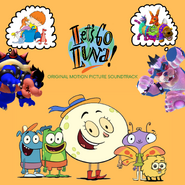 A poster with an original release date

Australia release theatrical poster
Add a photo to this gallery
Retrieved from "https://ideas.fandom.com/wiki/Let%27s_Go_Luna?oldid=2631351"
Community content is available under CC-BY-SA unless otherwise noted.