Legend of Zelda: The Lost Oracle is a upcoming Legend of Zelda game for the Wii U. It will be expected to be released sometime in 2014. It will have High Definition graphics, and gameplay of the Wii U gamepad will be required to play.

It's gameplay is based off of Wind Waker. As Link starts to attack an enemy, he starts to do a series of combos on it. This is also the first Zelda game that returns with the Parry Attack, in which, when you see a flashing "A", and you press it, you will do a counter-attack on your enemy. The game also features different sword techniques as well.

This will be the first Zelda game have different difficulty levels. They effect how much damage Link takes, challenges in the game, sidequests, mini-games, and many other contents in the game.

Story in this game takes place during the Adult Timeline, and takes place after the events of Wind Waker, Phantom Hourglass, and Spirit Tracks. It tells of a legend of how a hero defeated a demon king, and saved the land from darkness. After defeating the demon king, a new oracle was made and was given to the hero's friend. Link, a young boy has been training as a knight at the Hyrule Castle, and is also great friends with the princess, Zelda. He is given word by the king to attend the town's festival, because he has heard that strange things have been happening lately in the kingdom of Hyrule. So as Link attends the festival to watch over, everything seem to be fine. But then out of nowhere, a man of darkness appears and starts to ask the king for something. He said he was looking for something called, "The Lost Oracle". The king said he had heard nothing of it, but the man knew he was lying. So without hesitation, Link dashed in front of Zelda to protect her, but the evil man stripped up a tornado, and ruined the festival. Link wakes up in the castle with the King. The king tells him that Hyrule is in great peril. He also told him of the legend of the "Lost Oracle". Arccording to legend, the secret of the Lost Oracle was sealed away somewhere in Hyrule Castle, and would not open unless the one that has three sacred elements. The king sends Link out on a little quest to find these three Sacred Elements, and find out about the secret of the Lost Oracle. 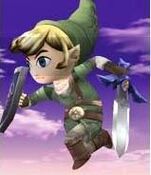 Garson
Add a photo to this gallery

Retrieved from "https://ideas.fandom.com/wiki/Legend_of_Zelda:_The_Lost_Oracle?oldid=2655331"
Community content is available under CC-BY-SA unless otherwise noted.