Kodiak: The Dog Timestopper is an American-Irish animated television series being created by Diana Uhlman, being her second series, after The Face Paint World Life. It is produced by Rhythmic Uhlman Productions (credited only), Cartoon Saloon and Cartoon Network Studios, and aired on Cartoon Network from October 9th, 2008 til June 14th, 2013.

A HBO Max film, serving as the de facto series finale, titled Kodiak: The Epic Mission, is set to be released on September TBDth, 2021.

In the anthropomorphic animals, set in the fictional utopian/normal hybrid city of Novasburg, New York, a dog teenager is chosen to become the next Timestopper, using those powers to save the world while also exploring his deceased father's past.

The animation for the series is being outsourced to Cartoon Saloon's own animation studio in Ireland.

The upcoming movie will serve as a de facto series finale, set to be released on September TBDth, 2021.

See Kodiak and The Heroic Novas.

Kodiak: The Dog Timestopper received critical acclaim from critics, with critics praising it for the animation, art-style, writing, right blend of action and humor and the characters. The score on Rotten Tomatoes is "96%", with the critical consensus reading "While not as memorable as The Face Paint World Life, Kodiak proves to be a very fun experience filled with good animation and exciting stories that will make you scream in excitement". On MetaCritic, the score is currently "85 to 100", indicating "universal acclaim".

In 2011, Cartoon Network Interactive released a video game based off Kodiak: The Dog Timestopper. It is released for the Nintendo Wii, Xbox 360, PlayStation 3 and PC. Currently, WB Games are in talks to produce a second Kodiak game.

The series was available to stream on Netflix before being removed on May 2020, eventually moving to HBO Max for streaming rights since June 26th, 2020. The series also reran on Boomerang and currently has reruns on WB Kids. 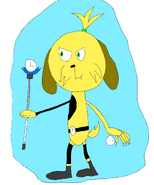 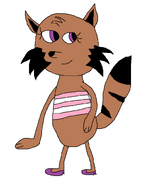 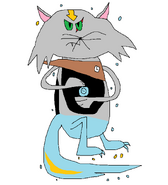 Hiskers.
Add a photo to this gallery

Retrieved from "https://ideas.fandom.com/wiki/Kodiak:_The_Dog_Timestopper?oldid=2530383"
Community content is available under CC-BY-SA unless otherwise noted.