Kitten "Kitty" Cheshire is a character from Ever After High. She's the daughter of the Cheshire Cat, a character from Alice's Adventures in Wonderland. In her destiny conflict, Kitty is on the Rebel side because she doesn't want to listen to the rules of destiny. However the only reason why Kitty would want to follow her destiny is most presumably her dream of making her mother proud and to be like her one day - a beautiful, smart master of all things chaotic. Kitty herself would rather keep her affiliation of anything to do with Royal/Rebel sides a secret to just keep everyone guessing. Per their escape to Ever After, all the escaped Wonderlandians transferred from Wonderland High to Ever After High. She is voiced by Bekka Prewitt in the English version.

Kitty is usually a mischievous misfit in what she says and does. She wants to create chaos and pursues her life making mischief and being the typical "bad girl" role. She slightly likes her destiny and slightly wants to follow her mother's footsteps, but Kitty is on the Rebel side for not wanting to listen to the rules of destiny.

Kitty is a mischievous chaotic anthropomorphic cat-person with an almost-villain streak to her. She usually likes to cause problem for others, but really, in truth, has a good heart and loves and cares for her friends. Her personality is quite catty, as she is very curious and likes to cause bad things to happen almost wherever she goes. Kitty never means to be fully antagonistic or be a real antagonist, but she sometimes forgets how to really treat her friends. Through and through, though, Kitty is kindhearted and will even stand up against her own mother to protect both her Wonderlandian friends and save her friends of Ever After. Kitty can somewhat bare a personality striking streak to Toralei Stripe from Monster High.

Kitty has long lavender hair pulled into curly high pigtails, sleek blue eyes with cat-like pupils and fair skin. She wears maroon lipstick and has pointy blue nails, but in the artwork and on the doll, she has pink lipstick and lacks the nails. Normally, Kitty takes on the paler colors of purple to add to most of her clothing. Cat-like attributes and accessories add character to most of her attires.

Kitty enjoys being evasive and tries to get as much quiet, alone time as possible. She normally catnaps around the Enchanted Forest on trees. Unbeknownst to most, Kitty is an avid knitter as she loves yarn. But known to most, Kitty loves a good prank and laugh - she often casts aside how other people are feeling when pulling her pranks, but she is not malevolent at heart nor mean in the least. 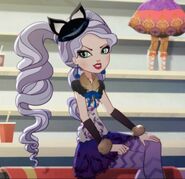 Add a photo to this gallery
Retrieved from "https://ideas.fandom.com/wiki/Kitty_Cheshire?oldid=1613346"
Community content is available under CC-BY-SA unless otherwise noted.