Kingdom of Tennis is a comedy-sports anime series airing on TV Tokyo somewhere around in 2018. It takes place in July and features a crossover between characters from Bleach, Ranma 1/2 , and Prince of Tennis, there are also OCs from the creator PrettyYandere690. 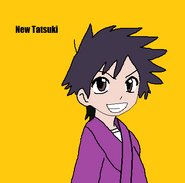 The 1st opening is the Hopeless Squad's song from Mitsudomoe, Satou-kun’s Hopeless Squad. The 1st ending is Caramelldansen sung by Caramell. The second opening is Caipirinha by Carinho Ariane Kranz .

Retrieved from "https://ideas.fandom.com/wiki/Kingdom_of_Tennis?oldid=1132055"
Community content is available under CC-BY-SA unless otherwise noted.