Kilowog is a fictional character and superhero from DC comics, and is one of the main characters of the Green Lantern comic book series. He is a Bolovaxian member of the Green Lantern Corps of the Sector 674, who held from home planet as a brilliant geneticist. He is is a drill instructor, responsible for teaching and mentoring newly-recruited Green Lanterns in Oa. He is also a friend and ally of Hal Jordan, Kyle Rayner, John Stewart, and Guy Gardner, and has been a member of the Justice League International.

He was created by Joe Staton and Steve Englehart, and first appeared in Green Lantern Corps #201 in June of 1986. 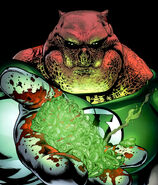 Add a photo to this gallery
Retrieved from "https://ideas.fandom.com/wiki/Kilowog?oldid=2707512"
Community content is available under CC-BY-SA unless otherwise noted.