Keyblade Vocaloid Princess is a video game crossover to be made by Crypton Future Media, SEGA, Square-Enix and other 3rd right companies.

Hatsune Miku is given her own keyblade and is asked to help a few other keyblade weilders to defeat a group of evil music makers who want to steal the creativity and inspiration from other musicians. 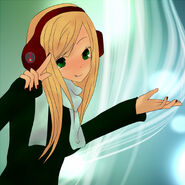 Sweet Ann
Add a photo to this gallery
Retrieved from "https://ideas.fandom.com/wiki/Keyblade_Vocaloid_Princess?oldid=424344"
Community content is available under CC-BY-SA unless otherwise noted.