Karen is admired by other students due to her calm and stoic nature. This, however, is her outer character--she is actually very lonely, especially when thinking about her parents, whom she secretly misses. In the beginning, she was full of enthusiasm as a class representative before she met Komachi. Because she has known Komachi for such a long time, Karen often feels responsible for being there for her; to an extent, she feels this way about everyone, believing it to be a natural responsibility of the president of the student council. Because of her position, Karen is able to memorize all the names and faces of all the Cinq Lumières students, and also easily takes responsibility when something happens to the school, as seen in the second episode where she wants Nozomi to explain what happened to the library the other day. Because of her loneliness when her parents are away and her responsibility of the school, it causes her to believe that she needs to do things by herself.

However, when Karen's angry about something or when she's arguing with someone, it sometimes gets to a point where she ends up saying hurtful or offensive things to other people, shown in episode 23 , where she called Komachi naive and indecisive when she got angry.

It also appears that Karen is afraid of scary things, which shocked all of her friends.

In episode 5 and 6, Karen acted as though her time with the precure had been a made up story. But with their company she had a lot of fun. When she meets Coco, she was quite stunned. When a Kowaina came and attacked, she was scared, but seeing her friends hurt, she wanted to help. When the blue butterfly disappeared, she was shocked and held lot of grief and depression. But encouraged by Nozomi and stunned by her hopes and friendship, she was happy and dealt with it the best she could. Finally, she became a Pretty Cure in the end of Episode 6 and the more she spends time with her teammates, the more she has fun with them. In episode 29, Jii-ya commented that she is making jokes that makes him happy, in words, she developed a tiny joking habit , but still responsible and serious.

Karen has long, straight dark blue hair with a long strand worn over her shoulders and her bangs brushed to the side. She has matching dark blue eyes.

In 5, her casual outfit consisted of a pale blue dress with light blue ruffled trim at the shoulders and a matching line on the hem of the skirt, along with five small straps at the chest. Worn with this are pale blue boots with light blue straps. In GoGo! she switches to a similar two-piece outfit with the ruffled trim now also included at her wrists and the hem of her skirt. On the back of her top is a matching bow. Her top is cut to reveal a darker blue section beneath it, matching her pumps.

In Yes! Pretty Cure 5: The Mirror Kingdom's Miraculous Adventure, Karen wore a Light purple jacket with a fluffy white trim and three yellow straps, over a dark teal skirt, along with pale blue and pale indigo boots with butterflies designed on them. Her dress she wears is dark blue and reminiscent of a puffy princess gown with white trim and blue bows. She wears a blue headband with a lilac bow on the side, dark indigo heels, and a white choker with a blue gem.

As Cure Aqua, her hair turns sapphire in color and grows very long, having to be pulled up into a thick, straightened ponytail held with a blue butterfly that has a red gem on it. Her bangs are also longer, with some of pulled pulled to the side of her head. She gains light blue butterfly earrings. In 5, she wore a pale yellow dress with blue trim to match the ribbon tied around her waist, and sleeves hanging off of her shoulders with a pale blue ruffled trim to match the petticoat. Sewn to her chest is butterfly to match her hair ornament. She gains pale yellow sleeves with blue trim and a light blue butterfly to match those of her earrings, along with her Pinky Catch on her left wrist. Her boots are blue with a small white butterfly, and she gains dark blue shorts.

In GoGo! her hair butterfly remains, but with a pink rose in the center. She wears a puffy pale blue dress with blue straps to match the trim of the sky-blue vest with a popped collar worn over it. Attached to her sleeves are pale yellow ruffles, and she keeps her butterfly with a CureMo string hanging beneath it, attached to her right hip. She keeps her shorts and boots, but they gain a stylized cuff. Her sleeves turn into gloves and gain a light blue streak down the middle. 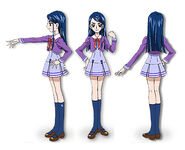 Retrieved from "https://ideas.fandom.com/wiki/Karen_Minazuki/Karen_Simone?oldid=1978308"
Community content is available under CC-BY-SA unless otherwise noted.