Judy Hopps is a rabbit from Zootopia. She is voiced by Ginnifer Goodwin. Judy's singing voice was provided by Sheena Easton in 2017 film Zootopia SINGS!.

Judy is fiercely optimistic and independent. Since childhood, she has harbored a dream to become a police officer, solely for the opportunity to help those in need and make the world a better place. She cares deeply for the well-being of others; this includes her family, friends, Mrs. Otterton's despair over the disappearance of her husband, and even Nick. During the chase in Little Rodentia, Judy intercepted every chance of danger for the small residents even when capturing the thieving Duke Weaselton was on the line. She has a large heart, and although she tends to keep her emotions under control - and even under wraps - a majority of the time, she is capable of expressing her true feelings in a genuine, powerful light. This is mostly seen with Nick Wilde, whose feelings and companionship she values highly, motivating her to prevent her own ambitions from harming others.

Due to being a rabbit, a species unassociated with such a high-stakes occupation, Judy faced continuous doubt and underestimation from those around her, from her parents to local bullies. Nevertheless, she used her opposers as a means to increase her determination and became progressively more insistent on reaching her goals than ever before with each naysayer; she believed in the importance of always trying and making an effort to reach your goals, no matter what. Her goal was to eventually become a resident and local officer of Zootopia, a city where predator and prey supposedly live together in peace and harmony, unlike the burrows, believing she will be quickly accepted amongst her peers and neighbors in spite of her species. She was very idealistic in this sense, having this set dream and not necessarily taking potentially negative outcomes into consideration which, unfortunately, made her too idealistic for her own good in this regard and she found out herself unprepared to face the negative aspects that lie within the city upon her first residential day, leaving her to easily fall victim to bigotry and manipulation.

Her optimism and determination to be a police officer tend to lead her to be, at times, overzealous and impulsive. As a parking enforcement officer, she gave 201 tickets to anyone whose cars had been in a parking meter too long (including herself) before noon just to show up Chief Bogo's doubts about her, arrested Duke Weaselton for stealing (even though parking enforcement officers cannot arrest someone, which was disclosed from a furious Bogo), and had nearly gotten herself killed on multiple occasions during her first case.

Furthermore, though she respects the law, the manner in which Judy carried out her first case is rather controversial; she was not above using her position of authority to blackmail others into complying with her demands and used her alliance with a notorious crime boss (a partnership controversial on its own) for interrogation purposes. Granted, these acts were mostly committed out of desperation, as her initial lack of respect from the police force, limited timeframe to solve the case, and her lack of resources due to not yet being in the city's computer system, forced her to take extreme measures to complete her mission. This also extends to tokenism as Chief Bogo gave her a job a parking attendant but wanted to keep a positive reputation for the Zootopia Police Academy.

Despite the odds and hardships, Judy remains optimistic and determined, adapting herself to the environment and those around her to build up both the way she presents herself and pursue her goals. She is clever and resourceful, which proves to be her greatest asset. She tarnishes the stereotype of a "dumb bunny", being intelligent enough to outsmart professional con artist Nick, several times. Months of training at the Zootopia Police Academy has also left her tactical, with an impressive amount of physical prowess. During times of chaos, she can quickly take charge of a situation by concocting an efficient plan on the spot, being daring enough to take dangerous chances, in order to potentially end the day victorious. More often than not, Judy comes out successful as a result of this.

From childhood, Judy has held the belief that predators and prey should be treated equally, and made attempts to refrain from acting on bigotry herself. Due to her childhood experiences, however, having been bullied by a fox, Judy has a mild fear of predators (mainly foxes), whether she wanted to admit it or not; so much so that it manifests as unintentional prejudice itself. After being pestered into taking a canister of fox repellent during her move from Bunnyburrows to Zootopia by her folks, Judy made the conscious decision to keep the canister by her side for a majority of the film. When she first spotted Nick snooping about the streets, she immediately assumed him to be in the midst of a scam, following and nearly assaulting him with the canister, all due to the fact that he was a fox. When it appears that Nick was merely an innocent civilian looking to buy ice cream for his son, she felt ashamed of her bigotry, which caused her to overcompensate in hopes of redeeming herself, wanting to be progressive and unbiased, while hypocritically claiming others to be otherwise; this would ultimately make her a pawn to Nick's scams, in the end, while simultaneously teaching her a valuable lesson reflecting both life and herself.

The events of Judy's first few months in Zootopia would ultimately blossom a more mature, practical, diligent and legitimately progressive individual. Through her experiences, she discovers the downside of having an overly idealistic mentality carry you through life, and that the world is a problematic and messed up place, filled with issues such as prejudice, learning that all mammals - be they predator or prey, foxes or rabbits - can be victims of bigotry, even when it is unintentional. No matter the species, all animals have feelings, hopes, and dreams, all of which can be destroyed by preconceived notions and constant underestimation. As such, all should strive to live and accept one another for who they are inside, and not the stereotypes they have been labeled as by society. Even with this new outlook on life, Judy would still contend to the method of trying. Using her success and experiences as proof, she implores those around her to make an effort to see beyond stereotypes, to prove your worth and to reach your goals in spite of all that may go against you, with the belief that these positive actions can ultimately lead to a better world, becoming the physical representation of Zootopia's meaningful motto, "anyone can be anything". 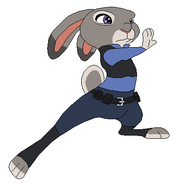 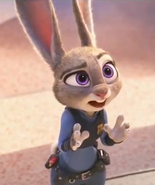 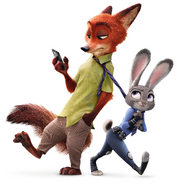 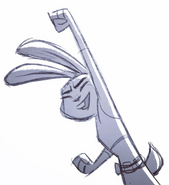 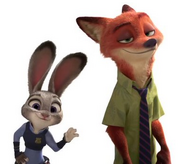 Add a photo to this gallery
Retrieved from "https://ideas.fandom.com/wiki/Judy_Hopps?oldid=1624555"
Community content is available under CC-BY-SA unless otherwise noted.