Many of the moves are taken from these articles such as this, this and this for reference (albeit with some changes for his Moveset if he is a part of the Super Smash Bros. series)

Jin Kazama originally uses a combination of the Mishima Style Fighting Karate and the Kazama Style Traditional Martial Arts, but after the events of Tekken 3, he discarded them in favor of using traditional karate. However, when he transforms into Devil Jin, he retains the former fighting style he used to have back then. In Smash, he uses some of the moves from Tekken 4 onwards, as well as moves from his other appearances such as the infamous Street Fighter X Tekken and the Project X Zone duology.

M – Straight Punch with other hand

A,A,A: Jin does a Left and Right to Spinning Hook Kick Attack as His Jab

Up+A: Jin performs a Double Lift Kick as his up tilt attack

Air Forward+A: Jin does a Leaping Side Kick As His Air Forward Attack

Air Back + A: Jin roundhouses backward in the air to kick the opponent

Air Down+A: Jin slams down with his fist downward in the air, On Ground when he lands he smash his fist to the ground (Akin to the moves from his home series)

Neutral: Grabs with both hands to the Opponent

Grab+punch: Jin knees the opponent while holding with two hands.

Forwards+Throw: Jin grabs the opponent and performs a Double Face Kick Attack move to the opponent.

Down+Throw: Jin throws the opponent to the ground and performs a "Black Out Punch Attack" to Him/Her.

Back+Throw: Jin performs a Over The Shoulder (Reverse) as his Back Throw Attack

Up+Throw: Jin does a Tidal Wave Attack at the Opponent he is facing against as an Up and Throw Attack

Neutral Special: Penetrating Fist - One of his special moves from Street Fighter x Tekken. Jin punches the air and a red electric orb comes out in front of him. The move is chargeable and if you fully charged it, two orbs would come out. The orb will disappear for 5 seconds or if the opponents runs into it.

Side Special: Electric Wind Godfist - Jin dashes for a bit and then uses EWGF to propel the opponent upwards. The dash allows Jin to get past projectiles.

Up Special: Devil Wings - Jin suddenly sprouts wings on his back and propels himself upward. It's very similar to Pit and Dark Pit's Up Special and that it doesn't damage the opponent if they make contact with him.

Down Special: Mental Awareness - Jin's counter move. Jin poses for a bit and if he gets hit during that animation, Jin will strike back with a powerful move.

Super Smash: Kazama Style 10 Hit Combo - As the name implies, Jin will do a 10 hit combo attack. He will say “It’s no use!” he’ll then do a punch to the face, a high kick to the face; six punches, a kick to the opponent’s knee and then finishes it with a Leaping Side Kick from Mental Alertness.

Final Smash: Devil Laser - Jin transforms into Devil Jin and fires the devastating Devil Laser into his opponents. It's like Zelda and Sheik's Final Smashes from the previous game and that it's capable of hitting multiple opponents at once.

Each Stage features lots of content from the franchise he originated.

The Mishima Dojo from Tekken 7 serves appears as one of the stages. It takes place on ground for most of the fights in there.

The inside of Central Tower from Tekken 6 appears as one of the stages, complete with NANCY-MI847J as it's boss.

Azazel's Chamber from Tekken 6 appears as one of the stages, complete with Azazel in it's regular and golden forms as it's boss.

The Tekken 4 literation of the Arena appears as one of the stages. Even though it remains the same as it's first appearance (like the fight taking place within a ring surrounded by metal bars while having lots of people cheering for the fighters fighting in it), the visuals are revamped, upgraded and updated to make the Arena look much better. Similar to the King of Fighters Stadium, it would feature appearances from everyone else who came from other Bandai-Namco IPs aside with Tekken.

From the Tekken series

From other Bandai-Namco series

Jin's Classic Mode is mostly based on his opponents and allies he met and faced off within his series.

Quotes Against Everyone Else

Kirby's hat is based on his hair, with an alternate design if he is donning his Tekken 7 Main Outfit, the Kirby Hat would have his Hooded form of that Outfit.

His Alternate Costumes in which all of them (other than palette swaps) are the ones he wears in his various appearances throughout the franchise and it's crossover appearances (as opposed to Everyone having Palette Swaps for their main appearances for a majority of their alternate costumes within the Game). All of them however, have lots of palette swaps. 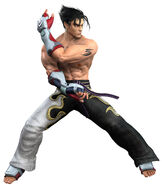 His Tekken 5 default attire prior to Tekken 5: Dark Resuecction

His default attire from Tekken 4

His Hoodie from Tekken 4 and Namco X Capcom 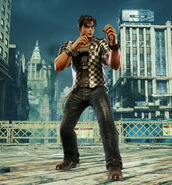 His Casual attire from Tekken 7

His Slacks from Tekken Revolution

Jin in his Emperor Armor from Tekken: Revolution

Jin in his Tekken 3/debut attire