Jarquanzela Goes to Jail is a cancelled animated Youtube special produced by Sharpness Knight Animation Studios, based on the Jarquanzela comedy sketches by WazzoTV.

One day in the city Jarquanzetopia, Jarquanzela lived in his own house with his mother. Jarquanzela felt bored, but his mom told him that they can't go outside today, due to heavy traffic and crimes which had caused mostly confusion and delay. Jarquanzela doesn't want to get stuck on boredom, and wants to go outside, but Jarquanzela's mom severely told him that they don't want to go outside, and wants his son to stop yelling like a screaming bonobo that got bitten by a rabid racoon. Jarquanzela marched straight into his room at the 3rd floor of the house. Jarquanzela was now at his room, lying down on the bed, feeling bored. He wants to think of something he should do. But then, Jarquanzela had a perfect idea. He made an escape plan from blueprint paper, using his white-colored pencil. Jarquanzela mentioned about his plan, but decided to take a 3-hour nap first. After that long nap, Jarquanzela sneaked out of the house through a window, gets into his car, and drove away to Jarquanzetopia himself. First, he speeds up his car over a 75-mile speed limit, then, he drove past a man wearing a red T-shirt with the white text saying "WAZZOTV RULES". That man is named Wazzo, the creator of the WazzoTV animations on Scratch.

The man was shocked, but he does felt very cross after finding out that Jarquanzela, the mayor of Jarquanzetopia, had sped up his own car for up to 100 miles per hour, while he is going somewhere, probably the bank for his money to be deposited. Then, the cafe worker talks to Wazzo about Jarquanzela doing some stupid stuff. Then, Wazzo met a 35-year-old blonde-haired lady named Michelle, and quickly told her to use her smartphone to call 911 on Jarquanzela. Meanwhile, Jarquanzela was driving his car, but its speed was still up to 100 miles per hour. Then there was trouble, 3 police cars are chasing Jarquanzela, and he was shocked when he saw them. Jarquanzela had to think of getting away from the police, and then, he had a bright idea. Jarquanzela drove his car into the bridge, and it flew high up to the air. The 3 police cars had to stop and wait for a slow cruise ship to go by. Meanwhile, Jarquanzela's car landed on top of the building, and drove into another building, and landed on top of it, too.

Jarquanzela stepped on the brake pedal to stop the car, but before he could even think of anything else, his car went out of control, and suddenly went straight into a dynamite factory, and crashed into it. His car was damaged, the engine is on fire, and gasoline was leaking under the car. Jarquanzela ran out of the car, and rushed outside of the dynamite factory for his life, and soon, the car exploded with a lot of dynamite, and the factory was demolished. A few minutes later, when Jarquanzela woke up from the destruction, he saw something terrible that he had done. Jarquanzela felt guilty, and then, he found out soon enough when he saw a police officer looking at him. Jarquanzela got arrested, and was sent to jail for 15 years. He stayed at the jail cell, and became a cellmate to Arpan, WazzoTV's worst character people had ever seen.

Jarquanzela called Dr. Beanson on his phone, and told him to become a replacement mayor of Jarquanzetopia. Jarquanzela hanged up his smartphone and puts it in his pocket, right before the warden came, taking Arpan to Jarquanzela's jail cell. Later that night, when the rest of the prisoners were sleeping, Jarquanzela was thinking about escaping prison, and had an idea. The next morning, right after breakfast, Jarquanzela made his first attempt to escape prison. The first attempt is to do the old quarter trick. Jarquanzela took out his old quarter from 1976, and rolled it to the nearest exit at the prison hallway. He tried to tell the warden to get him out of the prison cell, and walk over to the exit to pick up the quarter, but the warden refused to do what Jarquanzela said, so he choked him instead. The next attempt for Jarquanzela to escape prison is to make new friends, however, when Jarquanzela met the four tough prisoners, he interrupted their lunch, and told them if there's an extra seat of this table for him to sit on. Instead of letting Jarquanzela sit with the four tough prisoners, one of them, who is the oldest, strongest, and bravest, choked Jarquanzela, until 5 minutes later, the bell rang, calling all prisoners to go to the courtyard.

The oldest tough prisoner let go of Jarquanzela and left with 3 other tough prisoners. Later at the courtyard, he had made another attempt in order to escape prison, and this attempt is to climb up a fence. He was so close at reaching the top of the fence, but then, Jarquanzela noticed something. That fence is no ordinary fence, it's a very powerful electric fence, and soon, Jarquanzela got electrocuted by it, and he, who is covered with black ashes from head to toe, jumped clear away from the fence, and falled down to the ground. Later, Jarquanzela met Arpan at his own cell again, but this time, Jarquanzela became friends with Arpan, as Arpan introduces himself. That night, Arpan and Jarquanzela worked together to dig a hole that leads to the sewer tunnel. It took them 37 hours to dig, and they finally made it to the sewers, but only to get landed on the dirty sewer water.

Jarquanzela and Arpan thought they had never been that dirty. Soon, the two allies got to the sidewalk of the sewer tunnel, and quickly ran away underground to the city of Jarquanzetopia. Meanwhile, the warden and the two prison guards had noticed that a hole was made under a bed. Later in the city of Jarquanzetopia, Jarquanzela, with help from his new friend Arpan, climbed the ladder, opened up the sewer cover, and got out of the sewer. Jarquanzela closed the sewer cover, and catched up with Arpan, who is on the sidewalk. Jarquanzela's plan of escaping prison successfully worked, thanks to Arpan. Jarquanzela and Arpan made it to the mayor's office at the city hall. When Dr. Beanson saw that Jarquanzela had returned, he packed up his personal belongings, and went back home to 123 Greeny Phatom. Arpan went out of Jarquanzela's mayor's office, when he headed straight to his apartment at Jarquanzetopia. Jarquanzela thinks it was so good for him to be back in his own city, and has decided to think about making his very own cooking show, broadcasting on television, but that is just the beginning of another story.

Cast of Characters (in order of appearance)

Jarquanzela Goes to Jail was originally going to be released in March 2016, but was delayed to April 2016, and without any further help from other Youtubers and Scratchers, the video was cancelled.

Character model sheet for Michelle
Add a photo to this gallery

This video will be animated in TVPaint Animation, and edited with Windows Movie Maker.
Add a photo to this gallery 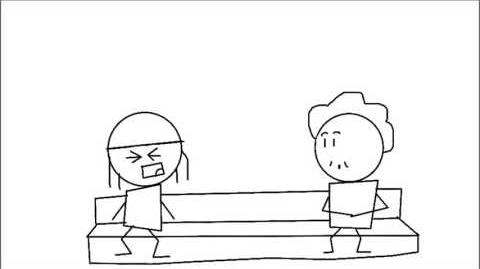 Official logo
Add a photo to this gallery

Retrieved from "https://ideas.fandom.com/wiki/Jarquanzela_Goes_to_Jail?oldid=299244"
Community content is available under CC-BY-SA unless otherwise noted.