Iona Hikawa (Fiona in the English dub) is a main character in Happiness Charge Pretty Cure.

In civilian form, Iona has dark amethyst hair with tented bangs reaching her eyes and chest length hair with her forelocks slightly shorter. Her eyes are dark purple. In summer, she wears a light purple and pink shirt with light blue pockets and and a light purple two-layered skirt with short purple boots. In winter, Iona wears a purple jacket with a lighter purple shirt underneath. She wears grey shorts and white boots. In the movie, she wears a purple jacket with a white shirt underneath and a purple skirt with short light purple boots.

As Cure Fortune her hair turns lighter with her bangs appearing thicker and her forelocks much thinner. Her hair grows in length and gains a pink gem heart ornament with a lilac ruffled bow attached to the side. She gains gem earrings to match. Her outfit consists of a white ruffled shirt beneath a dark blue and gold vest lined with lilac ruffles around the bottom and a bow on the back. The collar is lilac with a gold heart medallion attached to an indigo and white bow. The skirt is a lavender ruffle, with the back longer than the front. Her white boots go past her knees with a gold heart attached to pale purple wings. On each arm is a white sleeve with gold cuff. Once she gains her new powers, she now wears a ring on her right middle finger that can summon her Fortune Tambourine.

She helps the weak and has a strong sense of justice and gentleness when she consoles people. With her sense of duty as a Cure and her excellent fighting skills, she goes on her own to bring down the Saiarks one by one.

She is cool, serious, obtaining excellent grades, and a capable girl. Strict both with herself and with others. She hates to lose. Doesn't laugh much. A bit careless in her perfection in that she thinks she can do anything by herself and won’t rely on others.

She has an aura which makes it difficult to approach her, thus she has few friends. She doesn't laugh because she is tense, and wants to change her cool and stiff character. In fact, she loves to laugh, to the point of spouting out her drink after hearing a random gag.

At the time of her first appearance she'll be expert at being alone, however as times goes by with Megumi and company, she'll learn to show her smile and fight as a team. Cute when she shows her dark side. She is an active and smart girl, and she is quite popular in her school.

She appears to be very cold towards Hime and scolds her that the Phantom Empire invasion is her fault. In episode 8, she predicts a terrible future for Hime and Megumi and even tells Cure Lovely not to trust Princess or there will be a great disaster. 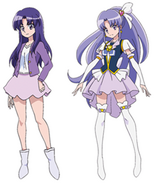 "Pretty Cure Shining Star Symphony!"
Add a photo to this gallery
Retrieved from "https://ideas.fandom.com/wiki/Iona_Hikawa/Fiona_Destien?oldid=1245129"
Community content is available under CC-BY-SA unless otherwise noted.