in 1967, James Bond confront Brian the Human at Brian's Party, But Bond left in anger swearing a Revenge for Brian's Last Stand, by 1971, Brian employed Both Female, a Mad Scientist (disguised by Dr. Zarokine the Alien) and a Nurse (Disguised by James Bond) who Nuclear-Nuke Brian with Bond's Bomb, James Bond wins his Victory, But all of his Organs survived and Rescued by same Female Mad Scientist who revealed to be a Alien called Dr Zarokine who placed his Organs into a WALL·E-Type Robot Body to Rule the Capital Galaxy

In celebration of the hotel’s anniversary, drac plans on giving the hotel to mavis and johnny. That is until he get’s cold feet about what johnny will do to the place. His solution is to turn johnny into a monster with the help of van helsing. In the process, things go terribly wrong and it also turns drac and friends into humans! Throughout the film they try to find a special crystal that will turn them back into themselves. after they find the crystal and everything is back to normal, drac gives the hotel to them knowing it is in good hands Just then an Big Global Alien Invasion Arrives forcing the Monsters of Hotel Transylvania goes to Outer Space to Rescues all the Humans and Animals from the Malevolent Greedy Aliens live in their Capital Galaxy (The Capital of the Entire Galaxies) kinged by Darth Vader-Esque WALL-E-like Robot with controlled by New Main Antagonist was a Human brain named Brian (will be voiced by Ian McKellen) with all of the other Organs from one exploded Earth Human King of Criminals with a same name "Brian".

After Brian gets Defeated who Turned back into a Human promised a Revenge while he was arrested by the Police, While Earth's Humans and Animals snapped out of Hypnosis and settled on Earth, then Dracula gets to opens a Breakfast Buffet in the Center of a Lobby at Hotel Transylvania, Johnny and Dennis have both invented a Burp Drink to make everyone burp, and they Burped in Celebration to the Honour for Rescued the Population of the Earth.

It was Co-composed by Marshmello and Mark Mothersbaugh 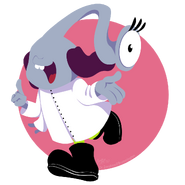 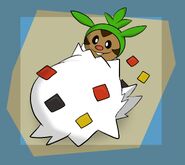 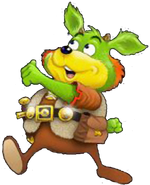 Cameo Appearance of Chespin, One of the Alien Crowds at the Stadium prepared to Eat Earth populations 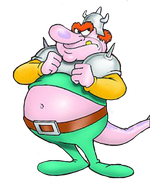 Cameo Appearance of Sgt Blob (The Dreamstone), One of the Alien Crowds at the Stadium prepared to Eat Earth populations

Sgt Blob's Same Face in the Crowd at the Stadium 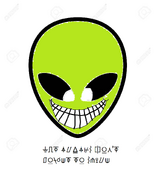 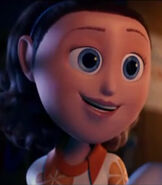 "1967" Title Card in the First bit of the Opening Scene

Captain Bridgie's Humanized Defeat
Add a photo to this gallery

Retrieved from "https://ideas.fandom.com/wiki/Hotel_Transylvania:_Transformania?oldid=2715451"
Community content is available under CC-BY-SA unless otherwise noted.