Hermione Granger is a witch and a character in Harry Potter. In The Legend of Epicness III, she helped Gumball, Darwin, Steven and Billy save the world from an unspeakable evil. She is played by Emma Watson.

She is very wise and smart like Cyborg. She tells the other heroes to save the world from evil. She is now kidnapped by an inadvertently resurrected Sunday, which was inadvertently released by Willow Rosenberg when she performed a spell to bring back Tara Maclay and Joyce Summers to life, but Harry Potter, Ron Weasley, Buffy Summers and Leni Loud saved her. 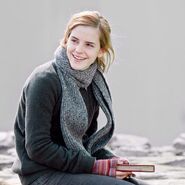 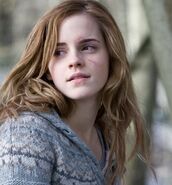 Singing "The Coolest Girl" from A Very Potter Series
Add a photo to this gallery
Retrieved from "https://ideas.fandom.com/wiki/Hermione_Granger?oldid=967383"
Community content is available under CC-BY-SA unless otherwise noted.