Dr. Henry "Hank" Pym is a fictional character appearing in American comic books published by Marvel Comics. Created by penciler Jack Kirby, editor-plotter Stan Lee and scripter Larry Lieber, the character first appeared in Tales to Astonish #27 (January 1962). The character, a scientist that debuted in a standalone science-fiction anthology story, returned several issues later as the original iteration of the superhero Ant-Man with the power to shrink to the size of an insect. Alongside his crime-fighting partner-wife Janet van Dyne, he goes on to assume other superhero identities, including the size-changing Giant-Man and Goliath; the insect-themed Yellowjacket; and briefly the Wasp. He is a founding member of the superhero team the Avengers and the creator of the robotic villain Ultron.

Debuting in the Silver Age of Comic Books, Hank Pym has since featured in several Marvel-endorsed products such as animated films, video games, and television series. Michael Douglas plays the character in the Marvel Cinematic Universe films Ant-Man (2015), Ant-Man and the Wasp (2018) and Avengers: Endgame (2019), and is set to reprise the role in the Disney+ series What If...? (2021) and the film Ant-Man and the Wasp: Quantumania (2022). 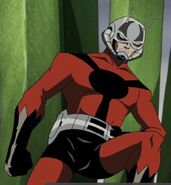 Add a photo to this gallery
Retrieved from "https://ideas.fandom.com/wiki/Hank_Pym?oldid=2713795"
Community content is available under CC-BY-SA unless otherwise noted.