Grotesque Steve, Steveposting or Creepy Steve the main antagonist refers to an eerie 3D model of the character Steve from the video game Minecraft . The image originated on the /v/ board on 4chan as a way to advocate the character's inclusion as a playable character in Super Smash Brothers Ultimate, with Steve often featured injuring playable Smash Bros. characters.

The word "Steveposting" was coined by an anonymous /v/ user on September 22, 2018, in a Smash Bros.-related thread. The word referred to the online debate pertaining to potential inclusion of the character in the game.

On October 1st, 2018, an anonymous 4chan user posted an image featuring a 3D rendering of Minecraft character Steve to /v/ board. The post argued for Steve being added as a playable character in Super Smash Bros. Ultimate.

In the following months, multiple threads featuring images of 3D Steve were created on 4chan, with a download link for the 3D model later provided by the original creator. 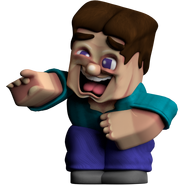 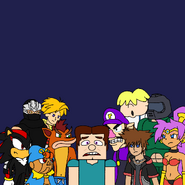 Add a photo to this gallery
Retrieved from "https://ideas.fandom.com/wiki/Grotesque_Steve?oldid=2018916"
Community content is available under CC-BY-SA unless otherwise noted.