Godzilla: Rising is an American/Japanese animated web television series developed by Warner Bros. Animation and animated by TMS Entertainment. It will premiere on Netflix in July 23, 20**.

Set 20 years after the end of Godzilla: The Series, lack of mutation activity starting with Godzilla's mysterious disappearance has made the members of organisation H.E.A.T. move on. Each member has gone their separate way, except for Nick Tatopoulos, who still continues his research at H.E.A.T. headquarters and teaches classes about mutations at Columbia University. When mutations start reappearing, Godzilla returns and Nick is forced to recruit his six students as the new H.E.A.T. members.

The score for the show will be composed by Mark Mothersbaugh.

Victoria "Tori" Cross
Add a photo to this gallery 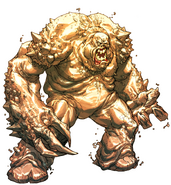 Golem
Add a photo to this gallery

Retrieved from "https://ideas.fandom.com/wiki/Godzilla:_Rising?oldid=2387272"
Community content is available under CC-BY-SA unless otherwise noted.