Gigan is a cybenatic space monster ceated by a race of shape shifting cockroach aliens called the Space Hunters and one of the main antagonists of Godzilla: New Age of Monsters along with King Ghidorah. He is an old enemy of Godzilla and one of his greatest enemies.

Gigan's sole purpose was to exterminate the human race and kill Godzilla.

Gigan was originally a space dinosaur and gets turned into a cyborg by the M Nebula Space Hunters.

During the 1970's, Gigan had attack Earth dozens of times and gets defeated by Godzilla.

Returning to Earth and combating the Gammas

Gigan returned to Earth to get revenge on Godzilla. He then was too powerful to be stop by the Gammas until Godzilla arrives to fight his cyborg nemesis. However, Gigan had gain the upper hand by shooting missiles from his hook hands and injuring the king of the monsters with his buzzsaw. Lucky for Godzilla, his skin was healing as he defeats Gigan as the space monster leaves Earth.

Team ups with other space monsters

Later in the other seasons, GIgan would come back to attack Earth and joins forces with the monsters of their homeworld. But when being outmatch by Godzilla and his allies, Gigan would quickly be scared and leave the planet as the Gammas and everyone else would called the alien cyborg a coward.

In Gigan's last stand, the Space Hunters had upgraded Gigan with some new modifications and salvage Xillien technology. Gigan wreaks havoc on Earth until he faces Mothra Leo and defeats him, Gamera, Ultraman and Giant Robot. When Godzilla Junior arrives, Gigan fights the son of his old enemy in Mount Fuji. Gigan launch some wires to Godzilla Junior's arms to pull him towards his Buzzsaw, but the cybernetic space monster met his demise when Godzilla Junior use his Atomic Ray to blast off Gigan's head. With Gigan dead, the aliens retreat back to their homeworld, but Godzilla Junior destroyed their ship. 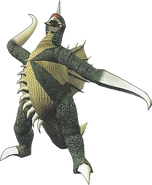 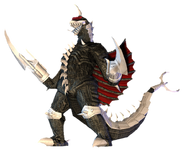 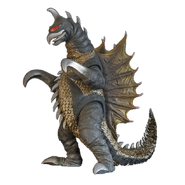 Add a photo to this gallery
Retrieved from "https://ideas.fandom.com/wiki/Gigan_(Godzilla:_New_Age_of_Monsters)?oldid=1398284"
Community content is available under CC-BY-SA unless otherwise noted.