Frankie Stein 2's storyline follows a similar, but slightly different plot compared to that of the movie. Frankie and Peppa Mint are on a journey to the Kingdom of New Auradon Prep to visit Fiona's parents. Frankie's in-laws aren't too thrilled that a crude frankenstein is married to their beloved Jekyll Hyde and ex-girlfriend, so the battle for acceptance ensues. The game also covers things not shown in the film. Plot elements are delivered primarily through a storybook interface (text and illustrations) shown before each level.

For the Wii U, PlayStation 4, PlayStation 3, Xbox One and Xbox 360 version of the game, the player is able to play as Frankie or sixteen of his friends throughout the game, and travel through 16 levels, while being able to switch between the four characters available in each level. In each level, the player controls a team of four characters, and can switch between them at any point. Each character has a unique ability that aids them in fighting enemies or moving through the environment (for example, Twilight can destroy obstacles and Peppa-Mint can slow down time).

The game is broken into different chapters, each with their own set of goals. One chapter might require the player to make sure micropets safely make their way to the witch's house. Another chapter might have the player act as a deputy in New Auradon Prep Land—collecting bits of R2-D2 and C-3PO from Star Wars, stealing treasure from a troll, helping the police clear out rioting hooligans from the streets, escorting Barbie Roberts while she window shops for a pink shoes, or ridding the town of the Melody Piper's rat infestation, collecting chickens for a stew, or battling Rainbow Kate via timed button presses.

Players play mini-games that the player will have to complete when the player isn't travelling on hazardous paths from point A to point B. Challenges that require the player his/her entire party include having to punch chickens into cook pots or a pen, escorting characters through a stage (The Cutie Mark Crusaders and the Micropets), and collecting fairies, jewels, etc.

The second type of mini-game, dubbed "Hero Time," gives one character a challenge to complete, usually emphasizing that character's particular skills displayed in the movie. Draculaura at one point has to chase a fleeing apple wagon while riding on the back of Raven Queen and a Dragon. Peppa Mint holds a private concert for a flock of black birds she's collecting for a pie (via exploding them by rhythm based button presses). Frankie has to throw a bunch of thugs into a paddy wagon.

As for 3DS game, it is a side scroller with graphics resembling the Super Mario 3D Land. The game is separated into five chapters with 1 bonus level if you collect 40 coins in each level. The story of the game is a compressed version of the movie its based on. There are nine playable characters in the game Frankie, Draculaura, Clawdeen Wolf, Twilight Sparkle, Rainbow Kate, Frankie human form, Draculara human form, Clawdeen human form, and Polly Pocket all being uniquely different. 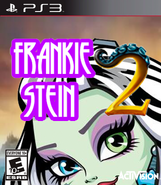 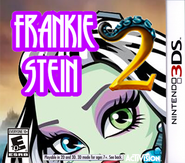 Add a photo to this gallery
Retrieved from "https://ideas.fandom.com/wiki/Frankie_Stein_2_(video_game)?oldid=1979015"
Community content is available under CC-BY-SA unless otherwise noted.