The actors of the original web series, return to resume their roles as animatronics of the series and also appear new characters.

After the events of the 1st web series, Foxy and Mangle have a son, called "Tommy" and is hired by Freddy to be a mechanic, just like Bonnie.
One day at the pizzeria, the other animatronics celebrate the arrival of Tommy, preparing a birthday party for him, however, Chica reveals to Bonnie that she will soon have a child, causing Bonnie to pass out.
On the other hand, Springtrap (who is still alive after the events of the 1st series) now works for a demonic bear called, Nightmare Fredbear, who sends him to steal a mystical object from the pizzeria, to deliver it to Nightmare Fredbear and gain control of the Freddy Fazbear's Pizza. Foxy, Bonnie, Freddy, Girl and Mangle are sent to retrieve the object. In his adventures, Freddy falls madly in love with an Funtime animatronic called Circus Baby, from "Circus Baby's Pizza World" and a 10-year-old boy named Cody, who helps him find his parents and started a crazy adventure endless.

The film was released as a special disc 2-disc blu-ray DVD. This DVD includes the performance of Five Nights at Freddy's 2 and the conceptual art of the film, in addition to having an animated menu. 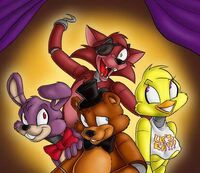 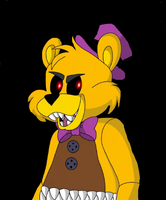 Nightmare Fredbear, the main antagonist in the story 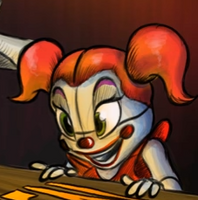 Nightmare Fredbear reveals himself to Freddy and his gang 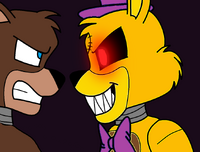 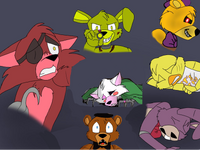 Retrieved from "https://ideas.fandom.com/wiki/Five_Nights_at_Freddy%27s_2:_The_New_Adventures_of_Freddy_Fazbear?oldid=2151776"
Community content is available under CC-BY-SA unless otherwise noted.