Firestar (Angelica "Angel" Jones) is a fictional mutant superhero appearing in American comic books published by Marvel Comics. Debuting in 1981 on the NBC animated television series, Spider-Man and His Amazing Friends (as Fire-Star), she has the ability to generate and manipulate microwave radiation, allowing her to fly and create intense heat and flames. In the comics, she has acted as a solo hero and as a member of the Hellions, the New Warriors, the Avengers, and the X-Men. 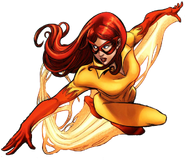 Concept of the Liz Allan version of Firestar in Iago PUC's version of Marvel' Spider-Man and Marvel's Spider-Man: Webbed Champion

Concept of the Liz Allan version of Firestar in Avengers Unleashed

Ann-Gell / Firestar in Marvel: All New, All Different Chronicles
Add a photo to this gallery
Retrieved from "https://ideas.fandom.com/wiki/Firestar?oldid=2703159"
Community content is available under CC-BY-SA unless otherwise noted.