Dragon's Lair: The Movie is a upcoming 2018 traditional animated fantasy-adventure film, directed and written by Don Bluth and Gary Goldman, based on the popular video game Dragon's Lair from the 80's including its sequel.

Long ago in the kingdom of Winterholler, there lived a young prince, named DIRK. He was the joy and hope for the future of the entire realm, but did not grow up to become the king. The court wizard, MORDROC created a formidable dragon to destroy the royal family to establish himself as the supreme ruler of the land.

On the eve of Dirk's betrothal to the Princess DAPHNE, the dragon crashes through the roof of the palace killing the King and Queen and sinking the entire royal court into the mote. The royal children, DIRK and DAPHNE, are saved from a certain death by royal nurse, HILDE, who spirits them away to a secret cottage in "The Swamps of Despair."

HILDE, with magic of her own, protects the children from that traumatic night by clouding their memories. She knows that Mordroc will not rest until they are dead. A prophecy is rumored that when the boy reaches sixteen years of age, he will return, kill MORDROC, and take back the throne.

On his sixteenth birthday, Dirk learns the truth, but rejects the idea of becoming the King. He wants to be a Knight and vows to avenge his parents deaths. MORDROC discovers DIRK and DAPHNE'S whereabouts, and sends a bigger dragon after them. HILDE, arms DIRK with the Sword of Truth, and gives DAPHNE the Bow and Arrow of Virtue. Neither sword nor bow are magic. They must use their wits to fight their way to a happier day. The fate of the kingdom is at stake. MORDROC is what stands in the way of a happy ending.

The making of the movie began somewhere in the middle of 2015, after many requests that Bluth got when he was producing Hollywood's theatrical The Wizard of Oz, starting with a campaign on Kickstarter. However, the crowd funding were later restarted on Indiegogo, due for not getting enough money to turn the project into action. Besides of that, the second one becomed at great success. 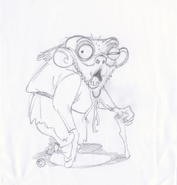 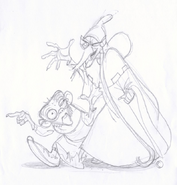 Retrieved from "https://ideas.fandom.com/wiki/Dragon%27s_Lair:_The_Movie?oldid=2151506"
Community content is available under CC-BY-SA unless otherwise noted.