Doctor Stephen Strange is a fictional character appearing in American comic books published by Marvel Comics. Created by artist Steve Ditko and writer Stan Lee, the character first appeared in Strange Tales #110 (cover-dated July 1963). Doctor Strange serves as the Sorcerer Supreme, the primary protector of Earth against magical and mystical threats. Inspired by stories of black magic and Chandu the Magician, Strange was created during the Silver Age of Comic Books to bring a different kind of character and themes of mysticism to Marvel Comics.

The character begins as an egotistical surgeon who loses the ability to operate after a car crash severely damages his hands. Searching the globe for healing, he encounters the Ancient One, the Sorcerer Supreme. Strange becomes his student, and learns to be a master of both the mystical and the martial arts. He acquires an assortment of mystical objects, including the powerful Eye of Agamotto and Cloak of Levitation, and takes up residence in a mansion referred to as the Sanctum Sanctorum, located in 177A Bleecker Street, New York City. Strange assumes the title of Sorcerer Supreme and, with his friend and valet Wong, defends the world from mystical threats.

The character was first portrayed in live-action by Peter Hooten in the 1978 television film Dr. Strange. Benedict Cumberbatch portrays the character in the Marvel Cinematic Universe films Doctor Strange (2016), Thor: Ragnarok (2017), Avengers: Infinity War (2018), and Avengers: Endgame (2019). Cumberbatch will reprise his role in the sequel to Spider-Man: Far From Home (2021) and Doctor Strange in the Multiverse of Madness (2022). 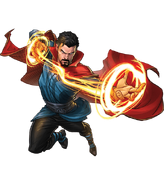 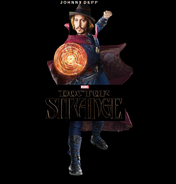 Add a photo to this gallery
Retrieved from "https://ideas.fandom.com/wiki/Doctor_Strange?oldid=2723541"
Community content is available under CC-BY-SA unless otherwise noted.