Doctor Victor Von Doom is a fictional supervillain appearing in American comic books published by Marvel Comics. Created by writer-editor Stan Lee and artist/co-plotter Jack Kirby, the character made his debut in The Fantastic Four#5 (July 1962). The monarch of the fictional nation Latveria, Doom is usually depicted as the archenemy of the Fantastic Four, though he has come into conflict with other superheroes as well, including Spider-Man, Iron Man, Black Panther, Doctor Strange, the X-Men, and the Avengers.

The character has been substantially adapted from the comics into several forms of media, including television series, video games, motion comics and merchandise such as action figures and trading cards. Most notably, Doctor Doom has been portrayed in licensed Fantastic Four live-action feature films by Joseph Culp in Roger Corman's unreleased 1994 film; Julian McMahon in the 2005 film and its 2007 sequel; and Toby Kebbell in the infamous 2015 film. 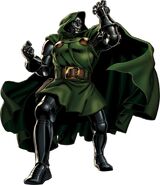