Dirty Pair: Bounty Hunter is a series based on the light novels and connected to the anime show.

Kei and Yuri of the World Welfare Works Association

Working with a Thaigiron male Thaimiraolian bounty hunter named Zakara Kharai in finding and apprehending a warlord and going on other adventures fighting scum of all types, from slave traders to gangsters to pirates and etc.

The Lovely Angels meet the Thaimiraolian

Filling A Void in One's Heart

Flashback to Childhood: The Yakuza were attacking

a Thaimiraolian dressed in cerulean and green armor approaches the sacred Zakara.

Asks him who he is, He replies his name to Zakara. "Jang Taurn."\

Jang begins to the yakuza henchmen with brutal

Kei, Yuri and the Thaimiraolian

Mughi: cat-like creature who is the pet of Lovely Angels.

Doctor Q: scientist of the 3WA from the OVA series.

Zakara Kharai is a male Thaigiron Thaimiraolian warrior who works as a bounty hunter. His ship the Dark Fury, a photon phaser rifle that had once been a World War 2 era M1 Grand rifle, World War 2 German Kyber knife Albam cycler pistol, and he joins as one of the main characters alongside the Lovely Angels. Thaimuron

Jang Taurn: A Thaigiron male Thaimiraolian, a feared bounty hunter, mentor to Zakara, and a Thaimiraolian-Yakuza Conflict veteran. He is also a Lovely Angels fan.

Tahara (田原) is a female human Thaimiraolian warrior who was Zakara's partner before she mysteriously vanished.

Morticia (モーティシア) is the mysterious leader of a terrorist group called the Serpent's Company.

Thaigiron/Thaimiraolian (タイギロン/タイミラオリアン) is an alien clan-based culture from the planet Thaviria. Warriors of different species.

Despite being the fiercest warriors in the universe, the Thaimiraolian dread the Lovely Angels because they tended to cause chaos and destruction on missions.

They once visited Earth on many couple of occasions.

The Thaimiraolian have inspiration from the Mandalorians of Star Wars. 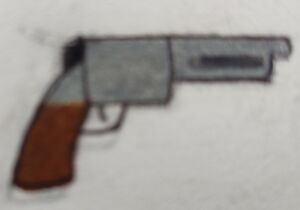 Retrieved from "https://ideas.fandom.com/wiki/Dirty_Pair:_Bounty_Hunter?oldid=2627382"
Community content is available under CC-BY-SA unless otherwise noted.