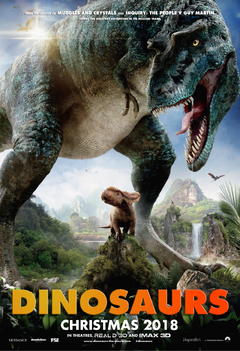 Dinosaurs is an upcoming 2020 live-action/computer-animated fantasy adventure buddy film set on a fictional Earth in which dinosaurs never became extinct. The production features computer-animated dinosaurs in live-action settings with actors providing voiceovers for the main characters. It was directed by Andrew Mason from a story by Adam Campbell-Sing and a screenplay by John Garvin and Richard Price.

A British-Australian co-production between Sing's FamilySing Entertainment (UK) and Mason's Hopscotch Features (AUS), The film was produced on a 160.5 million budget, making it one of the biggest independent productions to date; it was financed by FamilySing, Hopscotch and David Elison's Skydance Media instead of a major studio. Worldwide distribution rights were sold to Paramount Pictures just after production finished. The film was shot at Village Roadshow Studios in Gold Coast, Australia. The Australian government provided a tax credit for 46% of the film's budget, whilst Animal Logic designed computer-animated dinosaurs and added them to the live-action backdrop.

Dinosaurs is set to be released in 2D, 3D and IMAX 3D screens in the United Kingdom on 10 November 2018, Australia on 4 December 2020, three weeks before opening in the United States, Canada and remaining international territories on 18 December 2020.

Archi, a Triceratops cub who’s been raised by a royal family of horned dinosaurs, finds he is no longer welcome in the kingdom when fearsome Gigantopithecus Corvus, who bears the scars of Man, promises to eliminate what he sees as a threat using the power of the elusive and deadly son of lightning: fire. Urged to abandon the only home he’s ever known, Archi embarks on a captivating journey of self-discovery, guided by his fellow villager and friend Rubi, his Dodo guide Crash, and Sabre-Toothed Cat-turned-stern mentor Saba. Along the way, Archi encounters jungle creatures who don’t exactly have his best interests at heart, including Butch, a pteranodon who runs a "ranch" filled with prehistoric "longhorns", including his children Splinter and Ramsey, and Colonel Severus, a Mammoth who leads a military group of horned creatures patrolling the island of Erabor.

The movie is animated by Impossible Pictures

The Movie has 12 tracks ranging from 30 seconds to 5 minutes long.

While the movie doesn't strive for accuracy it is still a very accurate movie.


Cite error: <ref> tags exist, but no <references/> tag was found
Retrieved from "https://ideas.fandom.com/wiki/Dinosaurs?oldid=1653930"
Community content is available under CC-BY-SA unless otherwise noted.