"GET OUT OF MY LABORATORY!"
―Dexter

Dexter is the main character and protagonist of Dexter's Laboratory. He is an 8-year-old boy genius who has a secret laboratory. His intelligence makes him the brains of the family and he is one of the world's greatest inventors, having created countless weird and amazing machines and experiments. He is always working on new inventions and creations every day, but his sister Dee Dee is always breaking into his lab and destroying his work. The daily events surrounding Dexter's life mainly revolve around his relationship with his sister and everything that happens between the two. He is currently voiced by Candi Milo and before, he is voiced by Christine Cavanaugh until 2002.

Dexter is a very short young boy who has curly red hair that was passed down to him from his mother He wears a pair of glasses that appear semi-circular at normal times, but when he widens his eyes, the tops of them round out. He wears a little white lab coat with black buttons on it. He also wears purple gloves, and a pair of black rubber zipper boots. Occasionally he may or may not wear a pair of black pants that match his boots. He speaks with a Russian accent despite the rest of his family not having any accents.

Dexter is an extremely intelligent boy (a self described "Boy Genius") who has been creating fantastic inventions since he was a baby. He considers Albert Einstein to be his greatest influence. He is normally in conflict with his sweet sister Dee Dee. Dexter, though highly intelligent, often fails at what he has set out to do when he becomes overexcited and makes careless choices. He manages to keep the lab a secret from his clueless, cheerful parents, who amusingly never notice any evidence of the laboratory, even when it was right before their eyes. Despite coming from a typical all-American family, Dexter speaks with a Russian accent (a reference to Genndy Tartakovsky's own accent that he spoke with during childhood and prank calls Rob Renzetti sent to Tartakovski while the two were at CalArts). Dexter's favorite superheros are Major Glory, Action Hank and Monkey (not realizing that Monkey is in fact his own lab monkey). Despite his great genius, Dexter is in fact very naive and occasionally very ignorant about certain subjects to the point where it seems like he lacks common sense; such examples of are his ignorance to the nature of girls, classic arcade machines and matters relating to nature, having not even known about famed biologist and friar Gregor Mendel the discoverer of DNA until Dee Dee told him, which clearly shows that despite his vast capabilities, Dexter is still a young and inexperienced child who lacks wisdom and experience. Dexter also has a huge ego which often clouds his judgement and has caused him to make rash and often morally questionable decisions, such as attacking Santa Claus due to his refusal to accept that he was real until the end, letting the Earth be destroyed do his inability to compromise with Mandark and even attempting to destroy Dee Dee for taking away his dream of saving the future, despite her having no malicious intent. As shown in Ego Trip, as Dexter grew older his personality went through numerous dramatic changes, such as the cowardly Number 12, the courageous Action Dexter and the wise but incredibly senile Old Man Dexter. 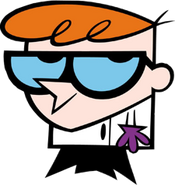 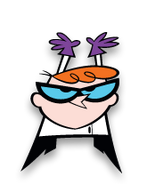 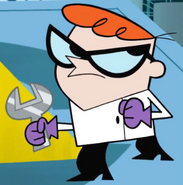 Add a photo to this gallery
Retrieved from "https://ideas.fandom.com/wiki/Dexter?oldid=2334663"
Community content is available under CC-BY-SA unless otherwise noted.