From The Directors Of Saw & Godzilla

The movie is about a girl named Lucy Springfield, a badass girl who is cause for murder, and one of the most wanted criminals ever, she hates her life so badley because when she was a young girl, she killed three of her bullies with a shiv from school for calling her a skank and fat, she got expelled from school and her parents were disappointed of lucy, so lucy hates her parents and she decided to move out and never come back, sense she's all grown up now, she killed over 300 people and she got arrested, but a few years later, she did a satanic ritual in prison about how much she hates her life, she had a satanic bible when she was a teenager from buying it from a abandoned library, she did the satanic ritual and summoned the devil, the devil possessed lucy and she escaped by using her demonic powers and she wants to kill everybody she hates. Later today, Luke Benjamin & Eric Benjamin are now back together and having a great life but a few months later they saw girl with satanic powers killing somebody so luke & eric wants to check it out, they saw lucy killing a person in the streets and she saw luke and eric, lucy beat the crap out of luke & eric, luke & eric still has their heaven powers so they used their heaven powers to knock out lucy, they don't want to hurt her or kill her they just want her to calm down, so it's up to luke and eric to stop lucy from destroying the world before it's too late. 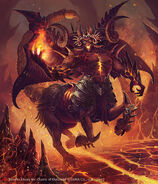 Retrieved from "https://ideas.fandom.com/wiki/Demon_Boy_2_(2024)?oldid=1505888"
Community content is available under CC-BY-SA unless otherwise noted.