Darkseid (Uxas) is a fictional supervillain in comic books published by DC Comics. Created by writer-artist Jack Kirby, the character debuted in a cameo in Superman's Pal Jimmy Olsen #134 (November 1970) before being fully introduced in Forever People #1 (February 1971).

Darkseid is the tyrannical ruler of the planet Apokolips, whose ultimate goal is to conquer the universe by eliminating all hope and free will in sentient beings. A New God, and one of the most powerful beings in the DC Universe, he was initially conceived as the main antagonist in Kirby's Fourth World saga before becoming one of Superman's greatest villains and the Justice League's archenemy.

Darkseid was ranked as the 6th Greatest Comic Book Villain of All Time by IGNand the 23rd Greatest Villain of All Time by Wizard magazine. He has been adapted into various forms of media, most notably voiced by Michael Ironside in the DC animated universe, Andre Braugher in Superman/Batman: Apocalypse, and Tony Todd in the DC Animated Movie Universe. After being referred to multiple times in the DC Extended Universe, the character made his feature film debut in Zack Snyder's Justice League, where he was portrayed by Ray Porter. 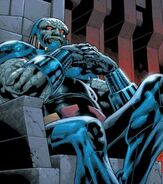 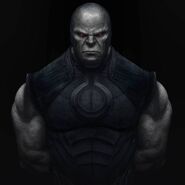 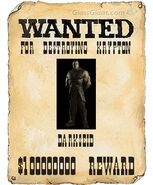 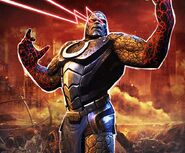 Add a photo to this gallery
Retrieved from "https://ideas.fandom.com/wiki/Darkseid?oldid=2713281"
Community content is available under CC-BY-SA unless otherwise noted.