Danny Phantom is a remake of the 2004 Nickelodeon series created by Butch Hartman. This series will retell Danny's origins and will put new characters, that have never be seen before in the original series. Some of the voice actors from the original series return with new actors. However neither Dash, Kwan, nor Mr. Lancer return as minor cast members until Season 2, unless they appear in background roles during Season 1. Unlike the original series, this one is animated and made by Zodiak Kids (the studio recently behind Totally Spies!, Martin Mystery, and The Amazing Spiez!). However, this series hardly burrows the elements of the original series.

Danny Fenton, an 14-year-old who lives in a world where he have his 16-year-old sister, Jazz and famous scientist parents, Jack and Maddie Fenton who are both CEOs of Fenton Industries. Then, while on his parents' company as a field trip, Danny finds a portal where he forced to put on a costume to open the portal. Than, he pushes the "On" button, the portal fused his DNA with ectoplasm, causing him to be half-human, half-ghost. When his parents find out about it, a octopus and triceratops ghost-like hybrid named Tricera-a-Pus attacks. Danny's father, Jack, gives him a domino mask when no one know who he really is, Danny becomes Danny Phantom where he and his family help fighting ghosts.

and the Casper High students and faculty are forced to stay at a terrifying and dangerous (but inviting) chalet, which as it turns out that Nocturne, Vortex, and Undergrowth are behind all this.

...and his alter-ego Danny Phantom 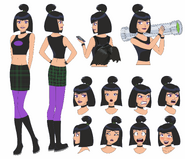 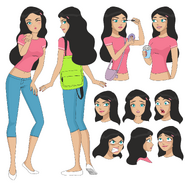 ...and his usual HAZMAT outfit

...and her usual HAZMAT outfit 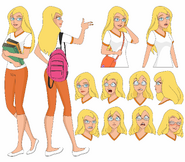 ...and her alter-ego Dani Phantom

Penelope Spectra, in her true form…

…disguised as a human principal…

…and in her new human outfit

Sam Manson in a scene from the episode “Danny Phantom Goes Hawaiian”, where she’s bound in rope above volcanic lava inside the volcano demanding help from Danny Fenton 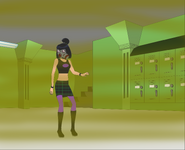 Sam Manson in a scene from the episode “The Smell of Terror”, where she looks for Tucker Foley in a stench-filled locker hallway in Casper High

Valerie Gray in her ghost-hunting suit