Cuddly Critters Club is a pet simulation video game created by UbiSoft Entertainment, Independent Arts Software, and THQ. The game is published for the Nintendo 3DS.

Whitney, a 10-year-old girl who loves animals, has started her own day care for different pets. The game focuses on her adventures with her friends and the pets that she looks after.

The game takes place in Whitney's hometown, Eagle Creek. In the game, you take care of virtual dogs, cats, and rodents. The game features several minigames where you teach them tricks and keep them happy by grooming, feeding, and exercising them. The game also follows a few storylines, depending on which character you are playing as.

In the game, the player assumes either Whitney or one of her friends. They can dress the characters in different outfits and make them walk with the arrow keys or run while holding shift and using the arrow keys. 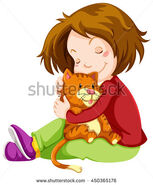 Whitney with her pet cat, Pickles
Add a photo to this gallery

Retrieved from "https://ideas.fandom.com/wiki/Cuddly_Critters_Club?oldid=1185971"
Community content is available under CC-BY-SA unless otherwise noted.