In 2018, shortly after Hamilton's death, Fujiyama departed from Warner Bros. and moved to Marvel Comics, with new projects based on the franchise being now supervised by Ryan Curcwald.

A teenager named Collin and his friends forms a team called The Omegas in order to fight the forces of Bryte with the help of the fingers and a talking opossum in the city of Magnum City.

This franchise received critical acclaim and is considered one of the most iconic Warner Bros. Interactive Entertainment franchises, alongside Mortal Kombat, The Dinosaur Princess, Good Ol' Magic and Howler, being praised by critics and fans alike for its premise, its blend of action and comedy, its artstyle and its character development.

In addition, fans consider Mechanical World to be the best game entry in the series yet. 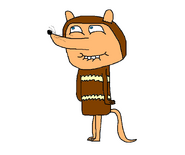 Evelynn Rodriguez/Macaw.
Add a photo to this gallery

Retrieved from "https://ideas.fandom.com/wiki/Collin_the_Speedy_Boy?oldid=2445234"
Community content is available under CC-BY-SA unless otherwise noted.