Cody Webb & Cartoon All-Stars Super Toon Rumble is similar to Super Smash Bros. series. Up to four players control a character and fight on a multi-tiered 2D stage. Players may use various items that appear randomly to get the fighting edge over their opponent. Additionally, the stage may use set elements in order to take out other players.

When players strike one another, glowing orbs will fall out of them. If players collect enough of these orbs, they will fill up their special meter that unleashes a powerful "All-Star Super Toon Rumble" attack against their opponents. For example, Sonic The Hedgehog will gather chaos emeralds to become Super Sonic.

The Game features a new story mode. Experience an original cross-over storyline to blow your mind! As the main characters, Cody Webb and the Cartoon heroes, they will battle against a mysterious evil threat, who is led by The Evil TV Remote Control, that is causing the Cartoon villains to join forces and universes to take over for the invasion. Some of the enemy characters appeared in previous Cartoon shows, such as the Verminious Snaptrap from TUFF Puppy and an army of parasprites from My Little Pony: Friendship Is Magic. Also, to play in Co-Op mode, activate all co-op controllers, and then select "co-op" from the Story Mode menu. Then, choose the number of co-op players. You can come back to this menu at any time during your adventure to adjust co-op settings.

A TV announcer for television, presumably the cartoon superhero Space Ghost (voiced by George Lowe), decides to take a day off and watching Family Guy. However, to his horror, he finds Stewie's World are facing a very strange, utter destruction, and channels are flipping like crazy, leading him to watch the all-star Anime superhero Cody Webb, who, seeing a newspaper article about the return of his arch-enemy, The Shadow Blot, heads off to find him. Cody is then transported into The Drawn Together World. There he battles a corrupted Wooldoor Sockbat, a wacky whatchamacallit. The hero then teams up with him to find his housemate. They find Cuddles (HTF) with The Shadow Blot, who escapes while the two are defending the housemates.

After Saving Cuddles A UltiTrax Attacks dimensional disturbance as Happy Tree Friends Dimension Is Vanishing Cody and Wooldoor are then transported to the Wasteland while They Battle a corrupted Buttercup [who somehow got into the Cody Webb world]. The three find The Blot, but are suddenly brought to Codyjunk mountain to fight Trevor Webb while The Blot escapes yet again. After the battle, Cody's world is also Destroyed, but the three heroes are saved by Stewie Griffin, who's built a machine that allows them to travel to the different dimensions. They then go to Stormalong Harbor, Flapjack's universe to have him help out too, but the harbor is attacked by Captain Hook and his crew.

While the others retreat, telling Flapjack they'll return, Flapjack fends off the pirates (along the way finding Captain K'nuckles), then the two of them fight The Shadow Blot and a corrupted Twilight Sparkle. After Shadow Blot escapes, Twilight joins with Flapjack and K'nuckles to defeat Captain Hook. When Bubbie the Whale finds out Flapjack and the others is under attack by Hook and his pirates, Bubbie swallows up Flapjack, Captain K'nuckles, Twilight Sparkle and Captain Hook, making it harder for Hook to do battle, (Because Flapjack and Captain K'nuckles have been inside Bubbie a thousand times.) After Hook's defeat, the heroes are picked up by the others and brought to Ponyville Equestria in Twilight's dimension.

Twilght, Flapjack, and K'nuckles then saved Pinkie Pie, Rairty and Applejack who were corrupted and Rainbow Dash and Fluttershy from the Blotlings, but Twilights says she doesn't know how to get them back. Meanwhile, back in Stewie's dimension, Stewie is busy formulating a plan to fix the dimensional meltdown. Unfortunately, Verminious Snaptrap sneaks in and, messing up a nearby temperature gauge to heat it up, sabotages the lab, sending Cody, Wooldoor, Pinkie Pie, Flapjack, and Buttercup right into the City of Townsville (the Powerpuff Girls' dimension), where Mojo Jojo is on a rampage in a giant robot. There, they find Blossom and Bubbles (who were, for some strange reason, corrupted, but returned to normal once they accidentally hit the travel machine's door, which the announcer said That Was Too Hurt & painful even watch). The group fights their way through the bustling metropolis, but then fight amongst themselves to decide who should go to face Mojo. The winner of the fight then destroys the robot's power core. Mojo then escapes, and the heroes leave as the dimension is destroyed.

Next, the group finds themselves in the world of SpongeBob SquarePants. Where Mr Krabs Being Chased By Bikini Bottom Crew, they rescue a corrupted SpongeBob and Patrick Star from villainous forces. After Journey To Saving Mr. Krabs, SpongeBob and Patrick join up with the heroes and head out just as their dimension is Destroy. After a quick stop to pick up The Mane 6, Flapjack, and K'nuckles at Ponyville in the My Little Pony universe, the now-one team returns to Quahog, which is, by now, heavily damaged. After the group fights their way through (rescuing Brian Griffin in the process), they find Plankton, who then fights the good guys. After Plankton escapes, the heroes go to other universes (accompanyed with Peter Griffin who mistakes Stewie's dimension travel machine for a bathroom) as Quahog gets destroyed.

The heroes then go over to the Ren & Stimpy universe, where they encountered a corrupted Ren & Stimpy. Who Kidnaps Ren & Stimpy. They rescued them and go through a series of madness (caused by Discord) to go to another dimension, the Total Drama Universe. At Camp Wawanakwa, they see Cody, running away from parasprites untill Wooldoor scares him off. Cody joins the heroes and runs from Camp Wawanakwa, The abanoned Studio lot, and the TDWT plane. As they left, the heroes travel to Endsville and encounter Grim, the Grim Reaper. After fighting their way through the wrecked up town, escaping a wild tornado, defeating General Skarr in his helicopter, rescuing Grim's corrupted masters, Billy and Mandy, and battling an army of zombies, the group goes to the Underworld. There, they find and defeat Mojo Jojo and Snaptrap. They then escape the dimension as it, like all the others before it The World Perfect and Saved. They then go to the TUFF Puppy dimension, where they are attack by a corrupted Dudley Puppy. They then freed them and Dudley and Kitty joins them. After a fight with Snaptrap, the heroes are attacked by Aku [the Shogun of Sorrows, the Master of Masters, etc.].

After Aku is defeated, the heroes go over to the universe of Jenny Wakeman (XJ9), a superpowered teenage robot girl. After defeating an army of Cluster drones, the heroes go into a hole where they encounter Chernabog, but then, Sonic The Hedgehog fights Chernabog and Joins the good guys. Before The Dimension Is Destroys yet. Wooldoor Baerly Makes It Thanks To The Lollipop K'suckles Had With Him. They then take the capsule (noticing how it's surprisingly roomier than it looks from the outside) to one more place to visit; Samurai Jack's dimension. After defeating the corrupted samurai warrior Jack joins up with the heroes, but are attacked by Plankton & The Shadow Blot. After Plankton & Shadow Blots's defeat, the now rather large group travels through Jack's world and defeats an army of Basket Robots.

As the dimension capsule prepares to make one more warp While Jack's Dimension Is Vanishes, it suddenly explodes for some reason, As the Announcer Belives That Capsule Exploding as Incredibly Poor Planning", the heroes are left floating in a very odd, and unrecognized dimension Compost of the Old Television Sets There, they find the main villain responsible for the whole dimensional meltdown Floating Downwards - the Announcer's TV Remote! The Announcer then watches, shocked, as his own remote control transforms into a giant one Creppy Eyed robot, with a Retractable Control Blaster Weapon that entraps the heroes in an energy ring and is about to send them through a portal to oblivion, presumably to permanently erase them and (Whatever Is Left for their shows) forever. But At The Last Second They summon Captain Planet, who uses his powers to frees Them and Together They Fight Againest The Announcer's TV remote.

Once the remote is defeated, Cody Webb and Stewie uses the parts of it to restore the Dimensions and, after one last goodbye, everyone is returned to their home dimensions. Wooldoor To Wooldoor's Room On The Right Spongebob and Patrick To Bikini Bottom Stewie and Brian To The Griffin House Dudley and Kitty To T.U.F.F Headquarters Samurai Jack To Samurai Dojo Grim Billy and Mandy To Endsville Blossom Bubbles and Buttercup To Townsville Flapjack and K'nuckles To Stormalong and Cody Webb To Cody Webb's Room On The Left Everything then goes back to normal, except, as the Announcer points out, that he now doesn't have a remote and must get up and change the channel himself. Then, he wonders if he could get a lava-man (Moltar) to change the channel for him with a giant lemur, the idea of which he likes the sound of.

Play through each character's unique story line! Continue to climb the ladder as you battle enemy after until you reach the top.

Event mode is a special challenge that were first introduced as a set of 50 single player tasks in Cody Webb & Cartoon All-Stars Super Toon Rumble. Each event puts the player into a scenario with special conditions and a certain objective. The player must complete the objective in order to complete the events, and the game records the completion and "score" of each event.

Practice with your favorite characters and choose the AI behavior. Also, Training mode allows the player to spawn any items and assist characters, change gameplay speed, and alter the number of computer players on screen without ever having to leave the match.

Standard Mode - The players fight against up to three other human or CPU opponents with standard rules in one of 40 different battle arenas.

Drones Mode - The players must compete against up to 3 CPU's or friends while fighting off wave after wave of drones.

Tournament Mode - The players battle against each other in turns. Several options can be chosen for tournaments, including:

AI Difficulty - You will choose how difficult the CPU opponents are.

Records - Displays the fastest victory times for each completed stage from all 13 levels of Story Mode.

Stats - Displays both Story and Battle Mode results on the selected Profile.

Movies - Replay the movies that have been unlocked through Story Mode.

Bios - View character models as well as a detailed description about each character.

Level - New levels to use in Battle Mode.

Costumes - 2 Alternate costumes for all 36 characters.

Characters - 9 brand new characters to use in any mode.

((All clips are removed due to copyright issues.)) 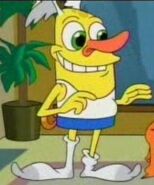 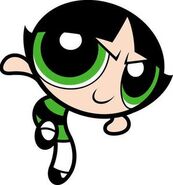 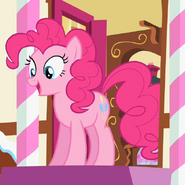 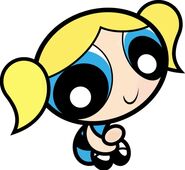 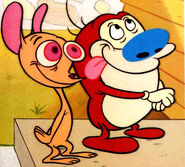 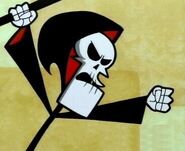 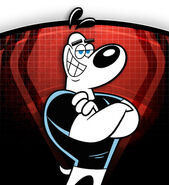 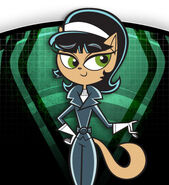 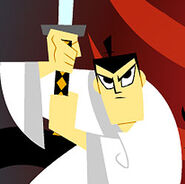 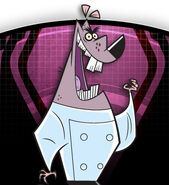 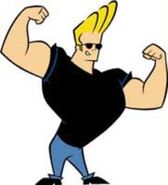 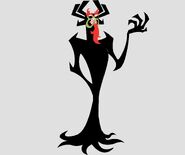 Derpy Hooves
Add a photo to this gallery 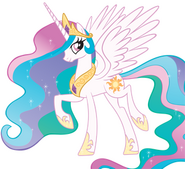 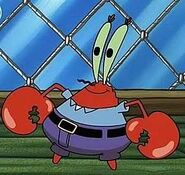 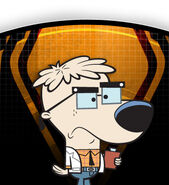 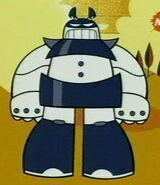 Demongo
Add a photo to this gallery
Retrieved from "https://ideas.fandom.com/wiki/Cody_Webb_%26_Cartoon_All-Stars_Super_Toon_Rumble?oldid=895954"
Community content is available under CC-BY-SA unless otherwise noted.