Start a Wiki
Codename: Kids Next Door Operation: REVENGE is upcoming third 3D Computer-Animated CGI Film based on a 2002 TV series of the same name It will be released in Theaters June 19, 2023 produced by Cartoon Network Movies and Curious Pictures Distributed by Warner Bros. Pictures. 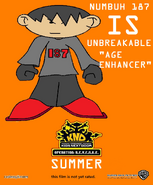 Rated PG-13 for some language and suggestive comments

Retrieved from "https://ideas.fandom.com/wiki/Codename:_Kids_Next_Door_Operation:_REVENGE_(2023_Film)?oldid=2150948"
Community content is available under CC-BY-SA unless otherwise noted.