The Coachman (also known as Barker) is a member of Master Xehanort and the Horned King's Alliance. He enlists J. Worthington Foulfellow and Gideon (who are both terrified by him) to bring him "stupid little boys" (among them Pinocchio and Lampwick); he then takes them in a stagecoach to Pleasure Island, where the boys are free to "tear the place apart", though "they never come back... as boys!"

The Coachman is first seen sitting at a table in the bar of The Red Lobster with J. Worthington Foulfellow and Gideon. He puffs quietly on his pipe, listening quietly and intently as the fox proudly recalls selling Pinocchio to Stromboli. Foulfellow then produces a small bag of money - Stromboli's payment - as proof of his success, and inquires about the Coachman's business. The Coachman gets Foulfellow's attention when he places a huge sack of money, promising them "some real money" if they help him. He tells the fox and cat that he is collecting "stupid little boys" to take to Pleasure Island. Foulfellow is frightened at the mention of Pleasure Island, and he and Gideon jump when the Coachman gleefully laughs about his wicked business. He tells the two crooks to meet him with a group of boys at the crossroads of the village, where he will be waiting with his stagecoach, which is pulled by six donkeys. He promises to pay them well. Among the boys Foulfellow takes to the Coachman are Pinocchio (who has just escaped Stromboli) and Lampwick. Jiminy Cricket, fearing for Pinocchio's safety, accompanies the wooden boy.

The Coachman takes the coachload of boys to a ferry bound for Pleasure Island, a naughty boys' paradise, where the boys are free to run riot without fear of reprimand from adults until they make such "jackasses" of themselves that they turn into donkeys for the Coachman to sell into slavery. The Coachman whips his minions, ordering them to shut the gates, trapping the boys on the island. Just after he orders his minions to lock the gates, the Coachman is approached by Vanitas, who tells him not to let his sadism and greed consume his heart, lest he fall to darkness. The Coachman merely chuckles to himself that he won't let that happen to himself, and that he will be able to capture Sora and his friends for Master Xehanort's plans. Later that night, Jiminy Cricket and Sora find the Coachman's minions loading crates of donkeys onto boats. The Coachman examines every donkey, first checking that it cannot longer talk by asking its name, then, if the response is a hee-haw, ripping off the creature's clothes, if it has, before his minions throw the animals into crates. One donkey, Alexander, can still talk, and cries to be allowed to go home. The Coachman throws Alexander into a pen of still-talking donkeys. These donkeys are presumably kept by the Coachman to pull his stagecoach.

At this point, Jiminy realizes the fate of Pleasure Island's visitors and rushes to warn Pinocchio. Though Lampwick is transformed into a donkey, Pinocchio, despite growing donkey ears and a tail, manages to escape the island, with Jiminy's help. Meanwhile, Sora, who stayed behind to stop the Coachman, is confronted with the villains's minions, who are revealed to be Heartless Gorillas. Sora manages to defeat them all before finding himself face to face with the Coachman. Barker reveals that he was ordered by Master Xehanort and the Horned King to capture Sora and take him back to the World that Never Was so that the Xehanort Council can turn him into one of them. Sora refuses to go with the Coachman, and instead decides to put an end to his slavery business on Pleasure Island, battling the wicked villain with a bit of difficulty. Eventually, Sora is able to defeat the Coachman, ending his threat once and for all by knocking him off a cliff. The hero then manages to free all the donkeys, and reform them, allowing them to change back into normal boys. Thankful to Sora for saving them, Lampwick and the boys allow Sora to take them back home on the ferryboat, whereupon landing there, Sora is reunited with Pinocchio and Jiminy, who are befuddled by the fact that Geppetto's house is empty...

The Coachman can attack with his whip, which isn't too damaging (though his range can be somewhat annoying), however, he can also transform you into a donkey. This does two things: it prevents you from attacking, and it causes you to take double damage from Coachman's whip, making it somewhat dangerous now. Here's where your earlier mini-gaming on Pleasure Island comes in. The more mini-games you played, the longer you remain a donkey from the transformation. You turn back almost instantly if you didn't play any games at all, but if you played all the games, it takes several seconds to change back, giving the Coachman a pretty big attack window. Donald and Goofy can't be turned into donkeys, so while you're running, Donald's magic and Goofy's blows will do some damage at least.

Barker is an enemi in Disney's Adventures on Whells where it helps Professor Norton Nimnul to dominate the world, together with the Queen of Hearts kidnap Pinocchio and Alice. But it is finally defeated at Pleasure Island falling from a cliff.

He makes a cameo clapping in House of Mouse together with Professor Norton Nimnul, Queen of Hearts, Magica de Spell, Madame Medusa and Miles Prower.

Epic Mickey: The Power of Illusion

Barker is an enemy in Epic Mickey: The Power of Illusion that helps to Maleficent steal the illusion of Disney characters. Is finally defeated by Mickey and Jiminy Cricket.

Coachman Barker in Epic Mickey: The Power of Illusion 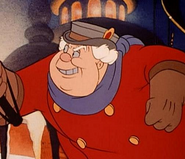