The movie begins in Nashville, Texas, all twelve kids don't remember what happened in front of their parents who are furious.

Christine opens the door and saw a nice British girl who's desperately need to go.

Emily runs upstairs to use the toilet. 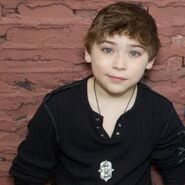 Mrs Emily Williams
Add a photo to this gallery

The filming began in May through September 2017. It was filmed in Dallas, Texas.

Retrieved from "https://ideas.fandom.com/wiki/Cheaper_by_the_Dozen_(Shanell0420%27s_Version)?oldid=2150794"
Community content is available under CC-BY-SA unless otherwise noted.