CatDog: The Secret of the Magic Golden Taco is an American animated television film split into two parts and is based on Peter Hannan's CatDog TV series. The movie will take place 5 weeks after the events of The Great Parent Mystery, which also premiered in 2004 on Nickelodeon, as part of the fourth and final season of the original series.

CatDog and Winslow set out on an andeveture through an ancient temple and found a magic golden taco, but Tito McEduardo, a crocodile who was banished by Rancid Rabbit 22 years ago for foiling his election as mayor, has plans with the magic golden taco: to capture all of the citizens of Nearburg, including CatDog's friends and enemies, take over the city and rule the world with the golden taco's magic, and its up to CatDog and Winslow, along with Raymond, a parrot, to stop Tito before it's too late. 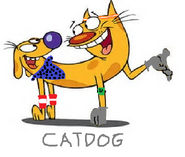 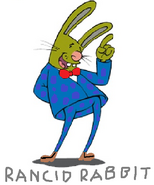 Retrieved from "https://ideas.fandom.com/wiki/CatDog:_The_Secret_of_the_Magic_Golden_Taco?oldid=1190445"
Community content is available under CC-BY-SA unless otherwise noted.