Cassandra "Cassie" Lang is a fictional character appearing in American comic books published by Marvel Comics. The daughter of Scott Lang, the character first appeared in Marvel Premiere #47 (April 1979) as Cassie Lang, in Young Avengers #6 (May 2006) as Stature and in Astonishing Ant-Man #6 (May 2016) as Stinger. A member of the Young Avengers and The Initiative, she has the same powers as her father, the ability to shrink and grow in size; however, she manifested her powers long after her first exposure to Pym Particles. 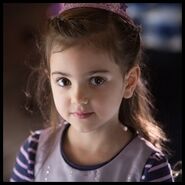 Add a photo to this gallery
Retrieved from "https://ideas.fandom.com/wiki/Cassandra_Lang?oldid=2692339"
Community content is available under CC-BY-SA unless otherwise noted.