Idea Wiki
Register
Don't have an account?
Sign In
Advertisement
in: Articles under construction, Disney animated films, Education,
and 9 more

Cartoon All-Stars to the Rescue: Revenge of the Seven Deadly Sins

View source
Note: Please do not edit this page except the creator and co-creator of it and also no rude comments.

The film will be written for the screen by David Kirschner and Paul Gertz, the makers of An American Secret of NIMH, and Linda Woolverton, produced by Charles Grosvernor, the director of Once Upon a Forest, and Don Hahn, directed by Colby Bluth, Bradley Raymond, and Karl Geurs, under the supervision of Pixote Hunt, the animation director of The Pagemaster and Kevin Lima, the director of Enchanted.

The film will be THX-certified and presented in IMAX 3D and Disney Digital 3D.

It starts off after the events of last movie. Everyone has come out of the poster from the end of last movie as Sam realizes that it can mean one thing: they've ordered a sequel to this movie. The gang sings "It's a Sequel" as they figure out what this film is about.

As our story begins, Michael is packing up his suitcase to visit his new friends Avery, Reggie, Emily, Gloria, Sylvia, Veronica, and Lester in college, while on his way he comes across Sam, Kim, and Rose (now joined by Danny Phantom, Tucker Foley, Valerie Gray, Ron Stoppable, Rufus, Jake Long, and Fu Dog) visiting him. One night earlier, in their house at college, Avery, Reginald, Emily, Gloria, Sylvia, Veronica, and Lester get abducted by Smoke's seven deadly sins and taken them to their lair.

Once they get there, Michael and the others soon discover his friends are being held prisoners by the sins. Just then Elmer Fudd as a security guard comes across them and they ask him where the sins took his friends from their house. He replies that the sins took them to the haunted mansion. Elmer and characters from Danny Phantom, Kim Possible, and American Dragon: Jake Long try to lead Michael to there. Meanwhile, Avery, Reginald, Emily, Gloria, Sylvia, Veronica, and Lester are somewhere held prisoners in the haunted mansion's dungeon where the sins admit that no one will save them, not even Michael and the toons. They send ghosts out to chase them out

A few hours later, the ghosts chase Michael out of the house while Danny, Valerie, Sam, Tucker, Kim, Ron, Rufus, Jake, and Rose (who now dons her new face mask) all try to stop them. As he keeps running, he happens upon a spider web and he is caught in it, even though it's made by everyone's favorite neighborhood Spider-Man. Spidey helps him out

The Nightmare Before Christmas 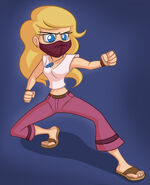 A concept art of Rose wearing her face mask.