Carrie White is a protagonist of Stephen King's Carrie.

In most film versions, Carrie has long strawberry blond hair and blue eyes,she is around medium average height and slender in weight and despite what her cruel peers mostly think of her she is considered to be quite pretty in appearance but suffers from insecurity and lack of confidence.

Despite her endless and tortured life Carrie is seen as a sweet and caring but quiet and withdrawn girl who is unfortunately constantly bullied by others mostly by her cruel classmates and horribly mistreated by her crazy mother unless provoked to anger and humiliation. Her deepest wish is to be accepted by her peers or at least have at least one friend to which her only true friend Sue Snell often feels bad for her. 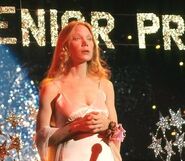 Carrie-White-carrie-white-14627267-320-240.gif
Add a photo to this gallery
Retrieved from "https://ideas.fandom.com/wiki/Carrie_White?oldid=1458659"
Community content is available under CC-BY-SA unless otherwise noted.