Captured is an idea episode of Marvel's Avengers Assemble.

Black Widow finds herself along with Captain Marvel, Ms. Marvel, and Wasp captured and lured into a series of traps orchestrated by Crimson Widow. They get help from female New Warriors (White Tiger, Spider-Woman and Squirrel Girl) to overcome these traps and thwart Crimson Widow's schemes for world domination.

Natasha Romanoff / Black Widow starts to wake up after being unconsciousness and finds herself in a room, strapped to a chair with no idea where she is, only to remember that she, Carol Danvers / Captain Marvel, Kamala Khan / Ms. Marvel, and Hope Van Dyne / Wasp were going on a mission to rescue Ava Ayala / White Tiger, Squirrel Girl, and Mary Jane Watson / Spider-Woman from Hydra when they got captured by Crimson Widow.

Meanwhile, Ms. Marvel wakes up, only to find herself shackled to the floor with power inhibitor restraints. She saw that Wasp and Captain Marvel are in the same room as she is in, also trapped, unable to move or use any of their powers. Captain Marvel realizes that Crimson Widow has captured them as Wasp says that they need to find a way to escape and stop her.

As she remains trapped in the chair, Black Widow overhears from Crimson Widow more about her plans with Hydra, which involves a hybrid program of both the Winter Soldier and Black Widow programs code-named "Winter Widow", which consists of the most unstoppable female metahumans being brainwashed as living weapons (just like Bucky Barnes was brainwashed as the Winter Soldier and Hulk once became Winter Hulk). Unknown to Crimson Widow, Black Widow is recording everything through a small microphone in her hear communicator for two unknown shadowed female spies of S.H.I.E.L.D. to pinpoint the secret location of Crimson Widow's hideout; One of the agents indicates it is time to move and the other one shaking the Earth with her powers. Just then, Black Widow only taunts that Crimson Widow's plan will still fail no matter how flawless it seems to be. As Crimson Widow leaves, Black Widow manages to free herself with her suit's hidden nanotech devices. She manages to sneak out of her cell through a vent. She also finds and frees Spider-Woman and White Tiger from their cages and the three formulate a plan to free the others before they can be brainwashed by Crimson Widow.

The three split up and go find the others while exacting to sabotage the security systems. They regroup upon finding Ms. Marvel, Captain Marvel and Wasp and deactivate inhibitor restraints. The group resume to find and free Squirrel Girl, who is being held in a pillory. Meanwhile, the agents called by Black Widow arrive in Crimson Widow's hideout neutralizing the guards one by one. Crimson Widow goes to Squirrel Girl's cell exacting to begin her experiments. To give the other heroines more time to come, Squirrel Girl taunts Crimson Widow and makes fun out of the situation, stalling Crimson Widow enough for Black Widow to knock her out and free Squirrel Girl. The fully freed heroines work to escape the facility while overcoming the traps set by Crimson Widow in there. Just as they make it close to the facility, however, they end up witnessing Crimson Widow's contingency plan for the Winter Widow program: an army of clones of Crimson Widow herself created with the remains of Ultron's synthezoids and the Skrulls' DNA. She reveals that she plans to send her clone army to attack New York and other cities around the world.

As Crimson Widow claims victory, Black Widow and the others fight off the clones before they can attack New York or any other city when Crimson Widow captures them again, utilizing a device neurologically immobilizes the heroines and forces them to bow down. Just as the group seems outnumbered, they are reinforced by Black Widow's back-up: squadrons of S.H.I.E.L.D. soldiers led by Maria Hill, director Nick Fury's closest informant, and Quake, an Inhuman with the abilities to manipulate Earth at will. Just as most clones are destroyed and the rest of them attempt to escape, Crimson Widow heads into the underground and attempts to start her contingency plan: to detonate a nuclear bomb designed to wipe out half of a nation. But before she can finish, Squirrel Girl ambushes her and summons dozens of squirrels to attack her, buying Black Widow enough time to catch up and defuse the bomb. Squirrel Girl's squirrels continue attacking Crimson Widow enough to cause her into falling on one of her own traps. As Crimson Widow is taken to custody by Hill and Quake into the Vault and loudly complains about her failure and humiliation, the heroines enjoy their victory in several ways: Romanoff is watching a Baseball match with Ava before the two decide to have a Baseball match, Van Dyne and Mary Jane are in a Table Tennis match against Danvers and Kamala with Squirrel Girl as the referee. 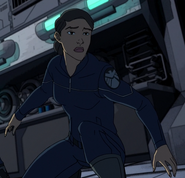 Add a photo to this gallery
Retrieved from "https://ideas.fandom.com/wiki/Captured_(Avengers_Assemble_episode)?oldid=2483021"
Community content is available under CC-BY-SA unless otherwise noted.