The character wears a costume bearing an American flag motif, and he utilizes a nearly indestructible shield that he throws as a projectile. Captain America is the alter ego of Steve Rogers, a frail young man enhanced to the peak of human perfection by an experimental serum to aid the United States government's efforts in World War II. Near the end of the war, he was trapped in ice and survived in suspended animation until he was revived in modern times. Although Captain America often struggles to maintain his ideals as a man out of his time, he remains a highly respected figure in his community, which includes becoming the long-time leader of the Avengers.

Captain America was the first Marvel Comics character to appear in media outside comics with the release of the 1944 movie serial, Captain America. Since then, the character has been featured in other films and television series. In the Marvel Cinematic Universe (MCU), the character is portrayed by Chris Evans. Captain America was ranked sixth on IGN's "Top 100 Comic Book Heroes of All Time" in 2011, second in their list of "The Top 50 Avengers" in 2012, and second in their "Top 25 best Marvel superheroes" list in 2014. 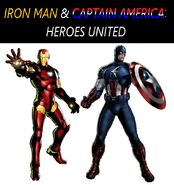 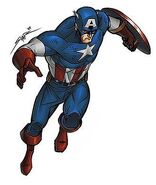 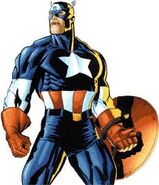 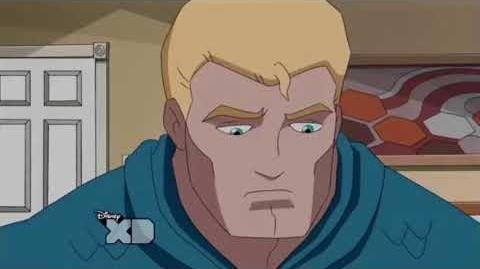 Captain America - In this Country
Add a photo to this gallery
Retrieved from "https://ideas.fandom.com/wiki/Captain_America_(character)?oldid=2707641"
Community content is available under CC-BY-SA unless otherwise noted.