Captain America: Serpent Society (2024) is an idea meant for the next film in the MCU Captain America series. In this hypothetical, it takes place either at the very end of Phase 4 or at the beginning of Phase 5. The film is a sequel to Captain America: Civil War, Avengers: Endgame and The Falcon and The Winter Soldier.

The film is directed by Rick Famuyiwa from a screenplay by Regina King and Shaka King, and produced by Kevin Feige and Barry Jenkins

After Sam Wilson adopts the mantle of Captain America, he and Bucky Barnes must stop a criminal empire known as The Serpent Society -- a faux pharmaceutical company who plan on releasing an experimental virus and causing a global pandemic.

To start off, Sam’s arc revolves around the pressure of being the leader of the new supers (again, assuming this film takes place right after an Avengers film). The press insulting him, every action of his being over analyzed and judged, and him feeling the pressure of being a black Captain America. As the new Captain America, Sam is currently working with the American government to get various laws passed; some of which include providing relief and resources to underserved communities, help overturn wrongful convictions and to start handing out reparations to families of slavery and other hate-crimes throughout the history of America.

I would like Sam and Bucky to stay as a duo (I imagine they ended up moving in together), they're just so interesting and funny together. Then we'd also have Misty Knight and Joaquín Torres as support. Torres comes in (this film will be his first time suiting up) to help out Sam, while Misty comes in, sent by Nicky Fury (as a ground agent of S.W.O.R.D.), and her and Sam develop a relationship reminiscent of Steve and Natasha.

Back in 2024, shortly after Sam’s speech in New York, a company called Serpent Solutions rose up, helping those hurt and displaced from the Blip. Years later, the world has returned much to normality and a rare period of peace between nations has sprung.

Serpent Solutions is a fake pharmaceutical company, run by Arnim Zola himself, still alive after the events of CA: The Winter Soldier. Supplied and funded by A.I.M., an advanced science and technology conglomerate. Serpent Solution's plan is to drive the superheroes out and reclaim control of the government by diving America as they supply arms and technology to radicals and subversive organizations in order to foster a violent technological revolution.

Serpent Solutions is seeking out Serpent's Breath, a virulent bioweapon that reads specific DNA and can effectively wipe out ‘super powered’ individuals. Currently being worked on by Dr. Karl Malus, former S.H.I.E.L.D. scientist and now lead researcher at Serpent Solutions -- Sam, Bucky and the others must work together to stop the bio-terrorist organization from releasing the experimental virus and causing a global pandemic.

Montague Hale (played by Demetrius Grosse; a former government official turned business man who has a hatred for superheroes and liked when the government had the power) is the face and public CEO of Serpent Solutions, although he is a pawn, being used by the real leaders, Arnim Zola and William Burnside (obsessed with Steve Rogers, doesn't think Sam deserves the mantle and wants to get rid of the "false capes"), known as the Grand Director.

Serpent Solutions has their own specialized task force to take down heroes -- Serpent Society.

The all female group includes; 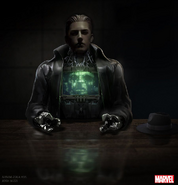 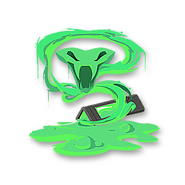