Bubbles is the second of The Powerpuff Girls known as "The Joy and the Laughter." Her signature color is sky blue and she loves animals.

She is voiced by Tara Strong in the original show, Maryke Hendrikse in Powerpuff Girls Z, and Kristen Li in the reboot.

Bubbles is defined as very sweet in personality.

Bubbles does, however, have a tendency to be overemotional, despite the fact of her having a habit to be ditzy, naive and sensitive, leading to her sometimes being regarded as the group's weakest link, by friends and foes alike. However, she can become very independent and aggressive, let alone extremely mad when tempted, as seen in Bubblevicious. Out of all the Powerpuff Girls she is the most feared by Mojo Jojo after having single-handedly taken him down in a fit of rage in the aforementioned episode. At one point, Bubbles gets severely hit on her head and dresses up as Mojo Jojo to fight her sisters.

After she defeats her sisters, the real Mojo Jojo was impressed until he becomes annoyed from her childish acts when she proclaims that she is no longer Bubbles, but Mojo Jojo and the original knocks her head with a large pipe he carries. Bubbles returns to normal after getting wacked and becomes saddened after seeing the damage she caused to her sisters, leading her to fight Mojo Jojo by herself after hearing of his motives. Her special superpowers are the Sonic Scream, understanding various foreign languages, and communicating with animals. Bubbles is also shown to have Superhuman Speed in the episode Members Only for flying around the globe, this also means she can be faster than Buttercup. After the girls were created in The Powerpuff Girls Movie, Professor Utonium named her Bubbles for her cute, bubbly, and joyful attitude (which she revealed by giggling when he named Blossom). Her best friend is Octi, a stuffed octopus given to her by the Professor. Her special ingredient is sugar and her signature color is light blue. She was also told in an interview from The Powerpuff Girls Movie that she was not afraid to show her emotions.

Bubbles is portrayed as having blonde (or yellow) hair in two pigtails and a neat, curved fashion and light blue eyes. Her dresses are light blue with a black stripe in the middle and she wears white tights and black Mary Janes.

Her appearance differs from her original counterpart, as she has shorter pig tails and clips in her hair. Also unlike her original counterpart, she has visible hair bands for her hair bunches and lighter blue in her appearance. She wears a light blue dress with a horizontal black stripe along the middle, as well as black Mary Janes and white socks. 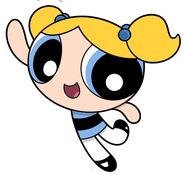 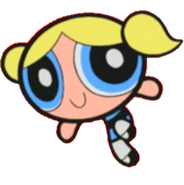 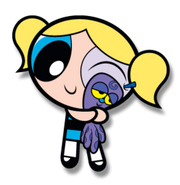 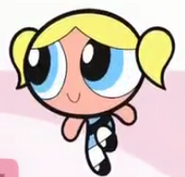 Add a photo to this gallery
Retrieved from "https://ideas.fandom.com/wiki/Bubbles?oldid=2162983"
Community content is available under CC-BY-SA unless otherwise noted.