Start a Wiki
Mythical, commonly advertised as Bryan Andrews's Mythical, is a American fantasy action dramedy series created by Bryan Andrews. It is being produced by Mad Hatter Entertainment, Cartoon Network Studios, Williams Street and Flame Owl Productions (being its first project) and aired on Netflix on December 7, 2018. It has premeired on Adult Swim by reruns on March 17, 2019. The show is currently on its second season. The show received universal acclaim, being praised for its animation, writing, casting and its dark tone.

Andrews later confirmed that it is no longer a Netflix series, as it was moved to Adult Swim for new episodes. However, on August 27, 2019, Andrews announced that the second season will also be the final season, and stating that the second season would have 40 episodes to make up for it. He does mention about a possibility of a made-for-TV movie. Three days later, he confirmed that the movie will indeed happen, but stated. However, considered the fact Mythical is not ending after its second season, it is unknown if the movie is getting cancelled or not.

However, on November 5th, 2019, Bryan Andrews later announced that he released a trend saying #ComeBackMythical, stating that Adult Swim will end up giving the series two or three more seasons if the trend proves to be successful. However, the trend proved to be a success, having at least 3,000 posts, enough to extend the series for two new seasons. The fourth season will be a limited epilogue season named Mythical: Epilogue.

Despite being a major hit, it has spawned a controversy, related to the show being put on kids streaming services and later an another one, this time involving epilepsy.

In a post-apocalyptic world, a Sea turtle warrior is chosen to protect his medieval-like town, Angelstorm, from a cold-hearted, cruel hippopotamus.

Andrews, in addition to announcing that the series would end after the second, confirmed that there are possibilities for a TV film that would truly conclude Zoko's adventures. Three days later, he announced that there would be a made-for-television movie that would end Zoko's adventure, confirming the series' final episode was to be a cliffhanger. However, he stated that the movie won't likely to happen until at least 2023. However, due to the fact that Mythical was confirmed to resume for two more seasons, it is unknown if it would be happening.

Mythical received universal critical acclaim by critics and fans alike. The score on Rotten Tomatoes is currently "100%", with the critical consensus reading: (reserved for GreenGrass). On Metacritic, the score is 98 to 100, indicating "universal acclaim".

(one of the reviewers calling it a spiritual successor to Velocity)

This, along with Primal, ended up earning a rare A+ on TBD.

On December 16th, 2019, the show, despite the fact it was for adults, started showing on children's streaming apps (like Toon Goggles, YouTube Kids, etc.), spawning a major controversy. Three parents ended up suing the companies that owned the streaming services for showing an adult cartoon in a kids' show. Bryan Andrews, the creator of the series, was unimpressed, saying "Seriously? Out of ALL shows on Adult Swim, it HAD to be Mythical! Just because it has anthropomorphic animals in it, does NOT make it a kid friendly project! I don't see BoJack Horseman, Family Guy, Sajoedri, USA or The Molly Show in there, even though they all have anthropomorphic animals! Is there something my show had that they don't that they had to put them in a kids' streaming app?". Three days after the controversy, the people who placed Mythical in services got fired, and were removed from the apps, settling and ending the controversy.

However, as of January 2020, along with other adult animated shows, videos of Mythical have been seen by YouTubers being marketed for kids. Andrews later stated that "Not this again... Now most the adult shows had to be hit by YouTube."

The episode Episode XLIII has sparked a controversy, due to the flashing lights in the episode where it screeches when it dies. That scene caused people with epilepsy to have violent seizures and are taken to the hospital. In awake of the controversy, until a edited version is being made, Adult Swim (by the request of the creator Bryan Andrews) banned the episode from airing again. During an interview, Bryan Andrews stated TBD.

The complete first season has been released on December 3rd, 2019 on DVD and Blu-Ray. 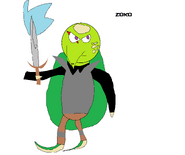 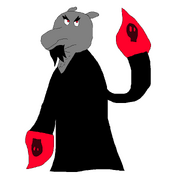 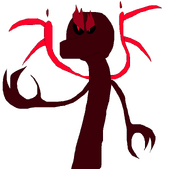 End Hippo. (demon form)
Add a photo to this gallery

Retrieved from "https://ideas.fandom.com/wiki/Bryan_Andrews%27s_Mythical?oldid=2461739"
Community content is available under CC-BY-SA unless otherwise noted.