Productions and Monster Studio. The film is scheduled to be released theatrically on November 5, 2021, in the United States, and September 29, 2021, in South Korea. It received mixed reviews from critics, as with its predecessors, and has grossed $98 million worldwide against a budget of $80 million. A Chiro short film named Hide The Mess! will be in theaters with Bread Barbershop.

In a town filled with food, Bread is a master cake decorator who gives life-changing makeovers that will put any customer in an amazing mood.

The film is originally scheduled to be released on October 15, 2021. But on June 18, 2021, it got delayed to November 5 due to Hotel Transylvania: Transformania took its October slot due to the COVID-19 pandemic. 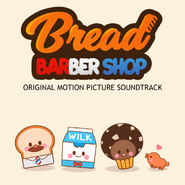