The Corps' core Leader (commonly addressed as the Grandmaster of the Blue Lantern Corps) and founder. He formed the Corps after overhearing the story of Adara, the embodiment of Hope. Later, when his cousin Kara was lost in space and caught up in the battle between the Green Lantern Corps and Red Lantern Corps, Superman was recruited by Ganthet in the search for Adara. Freed, Adara forged the Blue Lantern Power Battery, passing the first Ring to Superman. In his first mission as a Blue Lantern, Superman helped the Green Lanterns win the first War of Light by defeating the Red Lantern leader Atrocitus and reunited with Kara, and Adara shared Superman's memories with Kara, confirming that he really was her long lost cousin, who survived the destruction of Krypton just the same way her parents did.

One of the Guardians of Oa. He was the cofounder of the Corps.

The Corps' Second-in Command, a Blue Lantern of Sector 1 and the second Blue Lantern to receive his ring. Whenever Superman is absent, Saint Walker assumes leadership in the Corps.

A wise Blue Lantern of Sector 2. He was the third Blue Lantern to receive his ring. He is an elephant-like alien who bears a strong resemblance to the Hindu god Ganesha.

An Amazon of Themyscira who is one of Wonder Woman's closest friends and companions and is a Blue Lantern of Sector 666. She was the fourth member to receive her ring as well as the Corps' first female Blue Lantern. She was chosen by a Blue Lantern Ring after she gave children of Metropolis Hope when they were scared of the presence of Apokolips' Furies.

A young Graxosian Blue Lantern of Sector 2815 who is Superman's personal Blue Lantern prodigy. She was once a dedicated Green Lantern rookie until she overheard an argument between Kilowog and Kentor Omoto (who infamously called her and everyone of the other rookies as a "Troq" (a forbidden Tamaranean term which meant a "Nothing", a worthless person)) and eventually quit. She was later comforted by Laira and Superman, who convinced her not to lose hope and recruited her in the Blue Lantern Corps to overcome her inner doubts and shame.

The former king of Gorilla City on Earth until he was overthrown by Gorilla Grodd, Solovar became a Blue Lantern of Sector 666 when he helped some humans escape the Ape Tyrant's clutches. Most currently, Solovar is Superman's adviser.

A formerly domesticated hawk of Earth who became a Blue Lantern of Sector 1014 after he inspired his deceased owner's family in not quitting or losing Hope. He is also main partners with Green Lantern Ch'p, who patrols the same Sector.

An 9-year old human orphan who lost his parents after Vandal Savage's ruthless murder of Ronnie Raymond (Martin Stein's first merging partner as Firestorm) and was abandoned by his ruthless older half-brother. He became a Blue Lantern of Sector 2814 after Adara (in the form of a peacock) gave him a Blue Lantern ring to help him overcome grief and solitude.[1] He is also a member of Terra's Knights of Rao.

The Princess of Tamaran and a founding member of the Teen Titans. Starfire joined the Corps after she felt strongly insecure due to Val-Yor infamously insulting her as a "Troq" like Arisia Rrab was insulted by Kentor Omoto until she was comforted by Superman. Later, she was recruited by Adara as a Blue Lantern when the entity sensed not only Starfire's need for Hope, but also her past actions which brought about Hope on Earth's humans. Her activity in the Corps is similar to Superman's; while she still chooses to be with the Titans, she still keeps her ring just in case she needs it.[2] 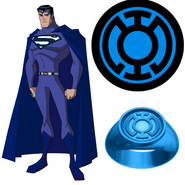 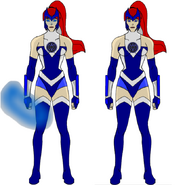 Starfire
Add a photo to this gallery