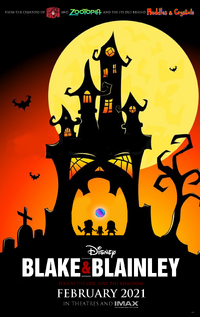 The film will be released in conventional and IMAX theatres on February 19, 2021, by Walt Disney Pictures.

The film is about two siblings named Blake and Blainley Novack, who love to play around and spend time in the forest outside of their home in their Northern California town, who discover a magic blue orb that was teleported from another realm. Their curiosity has forced them to touch the orb and transports them to the Kingdom of Taracalta. Confused and dumbfounded, they're welcomed by a race of short green elf-like creatures called the Weenclings. They contain a small ability of magic, in which Jaytox, the head person of the Weencling village, brings Blainley's plushie cat Scotty Pants to life. Later they meet the king and queen of the land: King Gerome and Queen Nora, who both discover that Blake and Blainley are the new "mighty saviors" to defeat an evil overlord named Sersyth the Dark, who wants to bring darkness, death, and genocide to the kingdom with his dark, but stupid, spirit army. So Blake, Blainley, Scotty, and a Weencling hunter and skilled archer named Corey Goodlin, must journey to the land of the forbidden to defeat Sersyth before he strikes his tyranny after his recent escape from his 300-year imprisonment. Along the journey they will face obstacles, creatures, and amazing things, such as a reward from the Wishing Fairy of Mystica, which will only come if the task of defeating Sersyth is accomplished.

Retrieved from "https://ideas.fandom.com/wiki/Blake_%26_Blainley?oldid=409289"
Community content is available under CC-BY-SA unless otherwise noted.